WHY capitalists want work expansion: A reply to David Graeber

I had an interesting exchange with David Graeber last night regarding the argument he raised in his article On the Phenomenon of Bullshit Jobs: Why would the capitalists want to expand completely unproductive jobs.

The answer to this question has a number of implications the Left often completely overlooks.

So the increasing complexity of production has forced businesses to hire more people to manage the highly sophisticated process of production. Jobs that seem meaningless appear that way because they have been broken down into a number of discrete tasks that only appear meaningful when taken as a whole. The problem with this explanation is that it forces us to accept the proposition capital expands labor the produces nothing simply because it cannot otherwise manage the production process. A process that becomes more complex and sophisticated, however, precisely because it allows capital to reduce costs of production.

Although Avent is right that production has become more complex and sophisticated over the years, this explanation for the increase in unproductive jobs is patently absurd.

Paul Krugman, however, has a completely different argument for why jobs expand even as the need for labor contracts. Krugman argues the problem goes back to the 1930s, when the capitalist discovered if you let capitalism behave the way it is supposed to behave, it would die. He quotes none other than Milton Friedman, who excoriates the Austrian school for not realizing the mortal danger the Great Depression posed for capitalism:

“If you go back to the 1930s, which is a key point, here you had the Austrians sitting in London, Hayek and Lionel Robbins, and saying you just have to let the bottom drop out of the world. You’ve just got to let it cure itself. You can’t do anything about it. You will only make it worse.”

What does this statement mean? It means that if the state just stood by and let “corporations engage in ruthless downsizing, the layoffs and speed-ups [that] invariably fall on that class of people who are actually making, moving, fixing and maintaining things”, you would very soon have no labor force left at all. Capitalism only exists to reduce the amount of labor required in the production of commodities and it is very good at this. Although no profit seeking firm would hire labor it does not need, shedding labor as firms were in the 1930s threatened the existence of capitalism itself.

Enter neoclassical theory to save capitalism from itself according to Krugman, even economist like Friedman, “was willing to give a little ground, and admit that government action was indeed necessary to prevent depressions.” The argument Krugman is making is that the ruthless trimming of excess labor by firms would go on until wage labor itself disappeared. State intervention in the economy was necessary to prevent capitalist firms from putting wage labor out of a job, so to speak, producing surplus value. During periods when the economy was headed for a depression, government had to step in a stimulate the creation of new jobs. Krugman calls this state intervention to create jobs the conservative response to the crisis of overproduction of capital.

The problem, however, is the character of the new jobs themselves: what are they? Obviously no one has to encourage a capitalistic firm to create a job so long as it is profitable for it to do so. Productive jobs — jobs that produce a profit — “produce” themselves, it is the unproductive jobs that government policy has to encourage. Government doesn’t encourage productive jobs, it encourages the expansion of labor in the form of unproductive jobs. Behind the expansion of bullshit jobs in our economy stands the fascist state busily encouraging the most wasteful unproductive employment of labor power. The whole of fascist state economic policy following World War II has been devoted to this very policy, known as “full employment”. 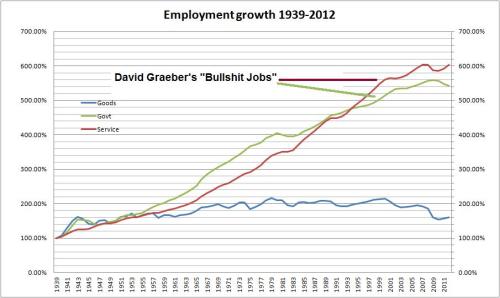 The capitalist class had only two choices: let the process of trimming labor forces continue until wage labor itself no longer existed. Or promote the expansion of wage labor in the form of unproductive jobs that can serve as a market for the output of productive labor. The unproductive sector of the economy today serves as the market for labor that is employed productively because there is no longer sufficient room for capital to expand into new territories within the world market.

This is already understood by many activists, who note how wholly unproductive defense expenditures are, despite the unproductiveness of this labor, extremely lucrative for its respective industrial giants, but the effect goes well beyond this limited and obvious example to encompass even areas of “social services” that we don’t normally associate with the profit seeking avarice of capitalist firms. Turning every area of human needs into a profit center — commodification — is precisely the aim of every new fascist state social program; it stands behind even the most benign appearing government program.

For instance, if the medical devices industry did not have Medicare and Medicaid as an indirect market for its output, it could not survive as capital. The same is true of big pharma, and a host of medical related activities. The argument made by bourgeois economists is that if these industries cannot function as capitals they would cease to exist entirely. Which is to say, we would not have life-saving technology unless society ponies up to keep the industry profitable. Of course, this is nonsense. The production of life-saving devices and the production of profit are two entirely different things. The medical industry is only concerned with production of profits — we should never confuse this with production of life-saving technology.

This goes double once we realize that it takes massive waste of labor time to keep industry profitable. For example, the same process that keeps huge numbers of people unemployed and in poverty — massive waste of the productive potential of society’s labor power — also makes food stamps profitable for Monsanto. And many people have already noted that the net effect of Obamacare is not to provide 30 million people with healthcare, but to force presently underinsured young people — who typically do not use the health system — to pay premiums to healthcare providers. Since they do not in most cases utilize the healthcare system except when injured, these young people simply subsidize the profits of the healthcare cartel.

The answer to Graeber’s question “WHY capitalists want work expansion” is that only by expansion of work is the expansion of profits possible. In no case will the capitalist class tolerate the reduction of hours of labor so long as there is profits to be made by its expansion. This imperative proceeds to absurd limits that even though all expansion of work is now unproductive, this unproductive labor is necessary to realize any profits. It is a desperate effort to maintain the system of wage slavery by employing the state (directly and indirectly) as the consumer of last resort.

However, the problem is further complicated by the fact that it is an irreconcilable contradiction: in order to subsidize profits, the mode of production must be further socialized. Carried to its extreme limit, productive capital itself must fall into the hands of the state. The very method for maintaining wage slavery runs into the problem that it must abolish wage slavery eventually.

This is why, for example, the process leading to Obamacare was so wrenching as the capitalist class realized the implications of its own actions. The Rube Goldberg contraption that is Obamacare, is nothing more than an attempt to resolve this contradiction — an attempt to socialize the losses of the healthcare industry, while keeping profits in private hands.

Overwork (and, in particular, overwork in the form of bullshit jobs) is a reflexive response to capital’s own impact on reduction of the need for labor — a reduction that threatens capital itself. Capital demonstrates its senility precisely in the proliferation of bullshit jobs.

4 Comments to “WHY capitalists want work expansion: A reply to David Graeber”