Looking for a few New Year’s resolutions? Here are some suggestions for 2014 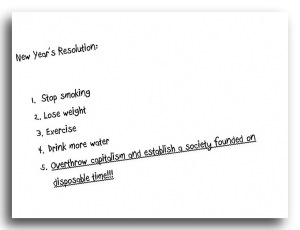 Do you make New Year’s resolutions? In the past, have you taken a solemn oath to stop smoking, lose ten pounds, quit doing crack in your mother’s basement? If you are like me, you probably failed despite the most earnest efforts. Although New Year’s resolutions are mostly a crock, if you do by chance indulge in such behavior, here are a few of my last minute suggestions for anarchists, Marxists and libertarians.

This is a no-brainer for communists: You can’t begin to think about superseding capitalism until you think about how to supersede politics. For some reason, communists have decided that politics is the highest form of social activism; indeed, even when they do not think this, as with Occupy, they seem unable to imagine, or concretely formulate, an activism that is not political. The problem with all political activism is that it does not and cannot touch on the real material relations of society. By definition, all political action is superficial and economically insufficient, but we need an activism that is radical. An anti-political activism takes as it starting point the effort not to employ the state, but to abolish it and replace it by association. There is nothing we want from the state but for it to go away and we have no demands on it except it go away. If it will not go away willingly, we must put an end to it.

It is impossible to conceive of putting an end to the state without, at the same time, putting an end to national borders and nations. Anti-political action must take as its aim an association that is immediately universal — global — and encompasses workers of every nation. We have to go back to our roots and remember that workers have no country. The working class is the material expression of the dissolution of all nations, classes, religions, etc.

RESOLUTION TWO: Stop talking about wages, pensions, social programs and unemployment and start thinking about how to put an end to labor.

Labor is not neutral: it does not just create wealth for a few, it creates poverty for billions side by side with this wealth. Labor is itself the active creation of poverty and misery, it is active self-impoverishment of the laborers; there is no palliative that can change the nature of labor, nor prevent the population of the planet from falling further into poverty. Any argument for labor — for full employment — is simply an argument for poverty, misery and environmental devastation.

RESOLUTION THREE: Stop talking about ‘how capitalism works’ and accept that capitalism is inevitably self-destructive and must collapse.

The sole argument for communism is that the contradictions of capitalism cannot be solved. We must begin to accept the notion that present society and present social relations are already anachronistic; there is nothing to be done for capitalism but let it pass on and join the previous modes of production in a museum. The end of capitalism will bring n end to all existing social relations founded on labor; nothing of present society will remain. With the end of capitalism, also must come the end of both labor and the state. Members of society will be free to enter into whatever social relations with each other that expresses their aims as individuals; their activity will be self-activity, an activity motivated by their aims alone. Nothing of the way ‘capitalism works’ will survive into a society founded on communism, on the free disposable time for the vast majority. Going beyond capitalism precisely means going to a set of conditions that violate ‘how capitalism works’ in every sphere of social life.

We have to turn the term working class into a pejorative on the same level as nigger. To be a worker is to be subject to all the forces of society, helpless, dependent, and deserving of no status but that of a slave. The days when communists elevate the worker and place her on a pedestal must come to an end. This means, above all, communists must recognize that in our revolution each of us acts as an individual, not as member of any class.

3 Comments to “Looking for a few New Year’s resolutions? Here are some suggestions for 2014”