“Karl Marx was right, but it doesn’t really matter.”

I have been reading this short piece by Matthew Yglesias “Where do profits come from? The obscure feud that tears left-of-center economics apart”. As the title states, the crux of the discussion is the failure of neoclassical economics to offer a credible alternative to Marx, who asserted that labor is the source of both wages and profit. The inability of the bourgeois simpletons to offer a credible alternative to Marx’s explanation results in a rather bizarre set of assumptions:

“Heterodox economists argue that it is circular to say that the profits accruing to the owners of capital are determined by the marginal productivity of capital, and then to calculate the quantity of capital in part by asking how profitable it is to own the capital goods.” 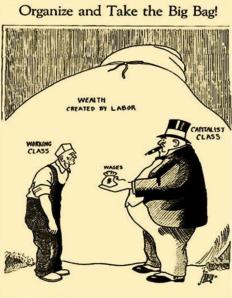 Labor theory says that profits are simply that portion of value created in excess of the value of the wages of the workers, while mainstream economics holds profits result from the marginal productivity of capital.

It should be clear that mainstream economics has already conceded this point to labor theory: labor is the source of all profit. No matter how this argument is obscured in all the gibberish of neoclassical economics, it has been demonstrated both theoretically and practically that there is only one source for both wages and profit: the labor of the worker.

As Yglesias points out:

Mainstream economists went through a few iterations of attempting to refute this objection before essentially concluding that it was correct. This is, indeed, one of the reasons why people on the heterodox side often seem to be embittered. The mainstream concedes the point, but tends to deny its significance.

To be sure, mainstream economists concede it is an error to argue capital (machines, plant, raw material) can be a source of value, but they argue this fallacy, which sits at the heart of neoclassical theory, is not significant. Krugman, for instance, recently made this statement:

“[Nothing] about marginal productivity theory depends on the exact truth of a simple aggregate production function”.

Krugman argues that although labor is the only source of value, in practice we can act if this is not the case and can assume capital is an independent source of value.

In other words, the question is really not whether labor theory is correct on the source of profit, but why Krugman and his simpleton colleagues can still behave in practice as if it is not? Why can simpletons like Krugman and Cowen continue to insist the error is not significant?

Here is the thing: people can argue all day that capital is not the source of profit, but empirically this is exactly how things appear!

This argument when taken to its extreme, most absurd, limit means that if the entire economy could be automated, GM could make huge profits on cars no one had money to buy; we would have 100% unemployment on the one hand, and 100% profit on the other. Only at this extreme, absurd, limit does it appear the argument of Krugman and his simpleton colleagues falls apart theoretically.

The argument Krugman and his simpleton colleagues make, therefore, must be that things have not gotten to this absurd limit; but, more than this, they have to be arguing that things cannot get to this extreme limit. Which is to say, the labor time required for production of commodities may diminish over time, but can never go to zero.

So the question seems to hinge on whether, short of its extreme limit, can the fact that labor is the source of all value result in collapse of capitalism. Even if we accept that direct labor can never go to absolute zero, can its reduction to some negligible quantity also lead to collapse?

For instance, the U.S. labor force engaged in agriculture today amounts to around 0.5% of the total employed labor force; which is to say, one person engaged in agriculture feeds himself and his family, plus 200 or more other workers engaged in other pursuits and their families, plus those unable to work, plus all the agricultural exports of the United States. If the total demand for productive labor were to fall to this negligible level, could this result in the collapse of capitalism?

Wertkritik suggest this is entirely possible and more: capitalism has already reached this extreme. This is the argument Kurz provides in an interview given in 2012, in this book, beginning on page 387 of the pdf. The steadily diminishing demand for labor has resulted in ever greater demand for surplus value in the form of credit. Sooner or later this woeful expansion of credit in the economy must be devalued:

“What has come to fruition here is a secular, immanent contradiction of the valorization of capital, which can be represented in two distinct stages. Initially, the development of productive forces that was a result of the necessity of competition led to a disproportionally rapid growth of fixed capital relative to labor force as a result of the increasingly scientific character of production. In order to employ even one single worker for the production of capital, it is necessary to mobilize a constantly increasing aggregate of real capital (increasing capital intensity). As a result, the “dead” advance costs of the valorization of capital increased to a degree that increasingly made it impossible to finance these costs out of the generated profit itself (machines only transfer previously generated value; they do not generate new value). The result of this was a historical expansion of the credit system that quickly encompassed all areas (corporations, the state, and private households). More and more frequently, it became necessary to draw on future surplus value (in the form of credit) in order to be able to generate actual surplus value. This contradiction was tenable as long as those credits could be paid back by means of ongoing surplus production. This compensatory mechanism, however, effectively disappeared with the onset of the third industrial revolution (microelectronics) at the end of the 1970s — labor power that generated actual surplus value was in this new historical dimension gradually rationalized out of existence. As a result, the chains of credits, which had to reach further and further into the future, threatened to break, and in fact did so in a number of areas. It is no accident, therefore, that the onset of the third industrial revolution coincides with the beginning of a series of financial, economic, and currency crises, the culmination of which we are experiencing today.” [Page 390]

Kurz’s argument is an exceptional example of the insight of the value critique school. Basically he argues with the rising organic composition of capital, the capitalists have been forced to borrow against futures profits to valorize their capital today. They are now threatened with a crisis that will kill capitalism as claims to future profits are devalued.

5 Comments to ““Karl Marx was right, but it doesn’t really matter.””