So here is a case study for how our Marxist labor theorists work:

First you establish a position that is diametrically opposed to Marx; namely that he was wrong to say money has to be a commodity. Second, you “prove” why labor theory also shows why Marx was wrong, because, in your opinion, the “dialectical movement of money as a category” means money loses its commodity character. Third, you declare you are the real Marxist and Marx was just some witless Victorian who did not have the relevant data at his disposal.

Finally, you declare the collapse of the Bretton Woods in 1971 was not the collapse of production on the basis of exchange value, but the “dialectical movement of money as a category”, which you then top off with this sort of completely devious and deliberately misleading statement:

“Nevertheless we cannot deduce from this any sort of a ‘breakdown’ theory of capitalism.”

The actual breakdown of production on the basis of exchange value in 1971 — the collapse of Bretton Woods itself — having been dismissed as unnoteworthy, you are now free to state that there is nothing about the situation after this breakdown that shows the necessity of a breakdown!

Really. On whose side are these fuckers fighting? The capitalists eviscerate money and reduce it to valueless dancing electrons to maintain their class rule, but this is completely ignored by our labor theorists, who rush in to assure us that nothing has changed.

The depth of cowardice and betrayal of the working class by these labor theorists is bottomless.

However, as I will show today, the evidence of their cowardly betrayal of the class is present in the empirical data and cannot be ignored. They are scabs and I will show why this is true based on the actual data they want to suppress or ignore altogether.

First, if you want to know whether the end of the gold standard contradicts Marx’s theory of money, how can you establish this by quoting Capital? It is already obvious that an inconvertible fiat as world reserve currency is directly opposed to Marx’s concept of money — this, in fact, is why the question was raised in the first place. Marx said one thing about money — that it had to be a commodity — but since 1971 what we use as money has not been a commodity. There is nothing here to discuss further.

What should concern us is whether the actual empirical data supportsd Marx’s opinion or if the fiat dollars now serving as money really is money or something else — i.e., the open dictatorship of capital over the working class, and imposed on the working class to ceaselessly extend its hours of unpaid labor.

In other words, what you need to establish is not whether fiat dollars as world reserve currency contradicts Marx, but whether this worthless fiat has any significance for the fucking working class! You have to look at the empirical record to determine how an inconvertible fiat compares to a commodity money in real life.

Has any labor theorist ever actually made this comparison? Not a single goddamned one of them. Not fucking Moseley, not fucking Arthur, not fucking Foley, not fucking Kliman — not one of these fucking scabs has ever done this very simple exercise. However, without ever once comparing valueless fiat dollars with a commodity money in real life, they summarily declare nothing significant has happened.

Paulani take this bullshit one step further: she declares that nothing in the empirical record supports the case for commodity money.

“It might be resolved if we recall that when, historically, the umbilical cord that linked the money form to the commodity form was cut (in 1971), the dollar value of goods shifted in relation to other currencies, but they kept between themselves the relations which their labour values (prices of production) produced earlier, backed in gold (even very remotely). In other words, if there is any special role for gold today in the contemporary system, it has to do with a kind of ‘ancestral trace of value’ it bequeathed to the commodities.”

To put this another way: the price of a house is still some definite multiple of an average daily wage of a worker in 2010 as it was in 1971. Both of these prices in gold may change, but they did not change with reference to each other. If this was true all Paulani had to do was publish the empirical data in her paper supporting her argument; but she did not — she simply made the assertion and moved on to dismiss gold.

So today I am going to show why Paulani is a bald-faced liar and a fucking scab like most of her colleagues in the Marxist academy. Here is the change in the quantity of dollars that represented one ounce of gold between 1971 and the present:

If Paulani is right we should see a similar movement between all commodities with little or no change in their relative gold prices and, as might be expected, the change in the “price” of gold does indeed lead to two very distinct measures of GDP.

And here is the same GDP as measured in ounces of gold: 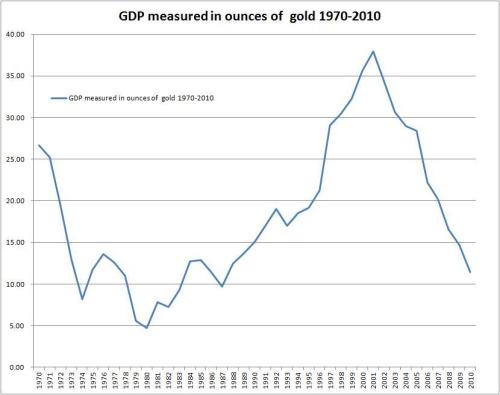 How does this sort of argument hold up when it comes to the prices of commodities in general?

Well, here is the change in the median price of a single family home as denominated in dollars between 1964 and 2010

And here are those same prices as measured in gold for the same period:

Nothing to see here — just as Paulani asserts.

But there is a problem when it comes to wages: Here is the price of labor power: the change in the average daily wage between 1964 and 2010, as denominated in dollars: 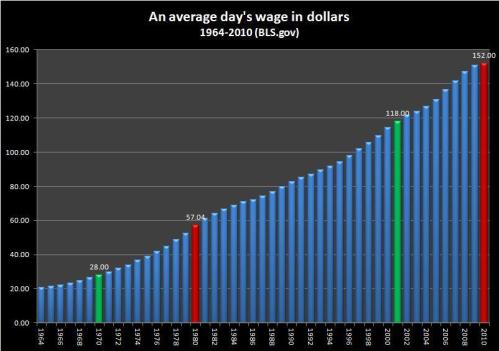 And here is the average daily wage in gold for the same period:

The average daily wages of the working class never recovered after 1980!

Compare them again, side by side:

It would appear that although the price of a single family home as measured in gold recovered by 2001, the average daily wage of the working class never recovered.

Now, does this look like the relative prices of commodities in gold remain unchanged as that scab Paulani asserts?

If my figures are correct, the number of days the average worker in the United States had to work to buy a home went from 860 days in 1971 to 1410 days in 2010 — a sixty four percent increase over a 40 year period. Yet, Paulani assured us there was no change in the relative prices of commodities after the collapse of Bretton Woods.

So here is my question: Is labor power a commodity or not?

Paulani has some very difficult explanations to provide, because in a scholarly work she has essentially falsified data. In fact, there is no control or peer review within the Marxist academy to check the work of labor theorists; thus, they can get away with making the most absurd statements unsupported by the empirical data.

Paulani can state that after the collapse of Bretton Woods, commodities “kept between themselves the relations which their labour values (prices of production) produced earlier, backed in gold”

This is an easily vetted piece of datum that was, however, never challenged by any member of the Marxist academy.

And why is this?

In any case, my back of the envelope data is out there now — anyone who has a problem with it can show it to be fraudulent; anyone who wants to can show that I have manufactured results to reach my conclusions.

And what is my conclusion?

The breakdown of production on the basis of exchange value means labor power can no longer be paid for at its value. As Grossman argued in 1929, wages have to be forcibly reduced continuously or unemployment results. There has been a breakdown in production on the basis of exchange value just as Marx predicted and it occurred beginning with the Great Depression and culminating in the collapse of Bretton Woods in 1971.

7 Comments to “Labor Theorists, Money and Lies: A brief rant”