Part Three: The Zero Lower Bound and the Collapse of Neoliberal Monetary Policy

I have been going through this process in order to clarify for myself the logic of the current discussion of so-called negative interest rates — an oxymoron if ever there was one. This is part three of the series; part one and part two can be found here. I hope it also will have some use to readers.

To recap my argument so far:

Keynes in his 1930 essay, Economic Possibilities for Our Children, diagnosed the cause of the Great Depression as the improvement in the productivity of labor. Although at first admitting this improved productivity must sooner or later require reduction of hours of labor, in his 1933 essay, The Means to Prosperity, he ultimately proposed to fix it by a two-fold strategy: First, the state should maintain abundant credit at very low interest rates to facilitate private investment; second, the state had to lift total spending on commodities through deficit spending.

By the 1970s, however, this strategy — basically a strategy to avoid reducing hours of labor — ran into the twin economic maladies of stagnation and borderline hyperinflation — sometimes called stagflation in the popular press — leading to the political movement to get rid of state management of the economy entirely. In turn, this effort to get rid of state management is more popularly referred to by the name, neoliberalism, on the Left.

However, neoliberalism is less than meets the eye: far from overturning Keynesian deficit spending and loose credit policies, neoliberalist monetary policy simply pushes Keynesian policies beyond that point where, according to Keynes own predictions, the state is now required to run continuous fiscal deficits and encourage continuous foreign trade deficits — through policies like NAFTA and TPP. Thus since the early 1980s or so, after a period of retrenchment characterized by a brutal austerity imposed on the economy by the Federal Reserve, Washington pursued both loose monetary policies, permanent fiscal deficits and ever widening permanent trade deficits.

This can be seen in the data supplied by the Federal Reserve itself:

Federal Deficit spending since the 1970s 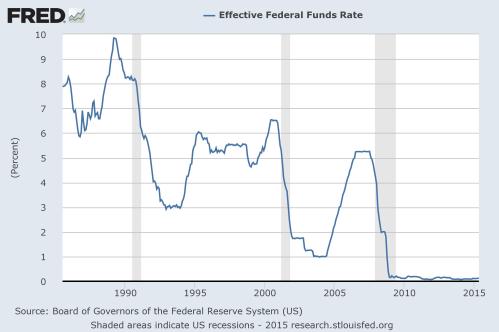 After the collapse of Keynesian policies, Washington simply relaxed barriers to imports and let the trade deficit balloon, while, for the first time in US history, running an unbroken string of fiscal deficits during peacetime. Unlike most countries, the United States could do this indefinitely because its currency was also the world reserve currency. As world reserve currency, the United States dollar is the embodiment of social wealth everywhere.

The change in Washington’s methods of managing the economy after the 1970s is sometimes referred to as “monetary dominance” in some scholarly economics literature. Monetary dominance is the opposite of “fiscal dominance”, under which full employment of productive capital is maintained by running a fiscal deficit. To be honest, these terms are nonsensical; designed solely to obscure the implications of financial technocrat policies; they are dog whistles employed by finance capital to hide the implication of their policies from the unwashed.

To clarify the real meaning of the terms: Under “fiscal dominance”, the state ensures full employment of capital and labor power simply by employing everyone who wants a job but can’t find one and by consuming otherwise excess capital on unproductive ends. This is the approach taken, for instance, by a jobs guarantee or similar sort of program and by military spending. Under fiscal dominance, monetary policy itself is limited to support the aims of fiscal policy by maintaining low interest rates and abundant credit for private investment.

The reverse is true under “monetary dominance”: the state allegedly ensures full employment of capital by relying primarily on maintaining low interest rates and loose credit. Fiscal tax and spending policies are limited to help mainly during periods of economic downturn, with so-called “automatic stabilizers”, mostly in the form of unemployment checks and food stamps and so-called infrastructure investment. No one is directly guaranteed a job by government; rather, policy works by encouraging private employment.

The problem of the zero lower bound

If the big problem with Keynesian deficit spending policies is the tendency toward hyperinflation and trade deficits, the big problem with monetarist policies is the zero lower bound. Once interest rates go to zero, monetary policy has little impact at all on private borrowing and capital lent to the state even for long periods of time has very low returns. The zero lower bound on interest rates thus carries a huge implication: monetary policy has failed.

Mind you, economists already knew loose monetary policy could collapse and Keynes discussed this possibility in his General Theory The problem is sometimes called “pushing on a string” — the state keeps reducing interest rates until they can go no lower. The central bankers, although aware of the possibility, argued they could avoid this trap by unconventional methods like quantitative easing. Once the policy rate went to zero, they argued, the effectiveness of monetary policy could be maintained simply by counterfeiting the currency to increase its supply.

According to their quantity theory of money, prices in the economy are a function of the quantity of currency in circulation. Thus counterfeiting the currency would cause inflation and force real interest rates back to a more normal range. A nominal interest rate of zero plus inflation of 2 percent would effectively mean a negative interest rate. Getting to a negative interest rate in real terms is critical because it is assumed that the nominal rate normally cannot go negative. The dominance of central banks in the economy thus rested on the silly theory they could create inflation simply by counterfeiting currency. But if the central bankers cannot actually create inflation, monetary policy is as dead as Keynesian policy that came before it.

The zero lower bound and the collapse of monetarism

I say “if” but in fact there is no “if” here. Monetary policy is dead. To take that one step further: Monetary policy was always smoke and mirrors and never existed in the first place. As Keynes pointed out in his 1933 essay, once all the capital that could be productively employed in an economy was employed, the only thing Keynesian policies could accomplish was to create inflation and trade deficits. All Washington did was let the trade deficits balloon, while continuing to rely on fiscal spending and loose credit policies.

Beginning with the 2008 financial crisis, this neoliberal policy has itself run into a dead end — the so-called zero lower bound on interest rates, where interest rates cannot be lowered any further. This dead end for state management of the economy poses a problem for the fascist state, since it implies there is no obvious alternative at the level of national economic policy to reducing hours of labor, with all the inherent implications should this happen that I detailed in my last post should labor hours reduction occur.

Implications of the zero lower bound

With fiscal policy having already failed in the 1970s stagflation and monetary policy crashing in the 2008 financial crisis, no policy exists to prevent the next economic downturn from taking its natural course: unemployment and capital devaluation on a scale that will make the Great Depression seem like a mild recession. I want to emphasize I am not engaging in hyperbole on this point: The forces Keynes identified as causing the Great Depression — the reduction of the need for labor outstripping new uses for labor — did not end with that event. They have continued to accumulate for the past eighty years. As the bankruptcy of Lehman Brothers demonstrates, if even a relatively small event cannot be contained by the fascist state, unemployment likely will go to 100% with a speed that is unimaginable today. An irreversible collapse is already preloaded into the mode of production.

Based on the above it can be seen that a lot is riding on finding an alternative policy now that the zero lower bound on monetary policy has been encountered. I will turn to this next.