A future beyond capitalism is the end of the world 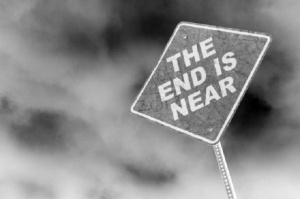 Zizek is famously quoted as saying, “it’s much easier to imagine the end of all life on earth than a much more modest radical change in capitalism.” I have been reading a lot of writers who are trying to prove Zizek wrong by imagining a society that might be loosely categorized as post-capitalism — a term I personally detest.

Despite my aversion to that term, I want to make several observations that might be considered odd for folks interested in the subject of post-capitalism:

1. The problem with most thinking about communist society, oddly enough, is that this thinking is almost always set in opposition to capitalism.

Just for a minute, imagine a world where you cannot sell your labor power, because there is no buyer for it at any wage.

The sale of labor power is determined by production for profit, by accumulation of capital — a power standing over against you. No capitalist will ever buy your labor power unless by doing so he can make a profit. Thus, the conditions most advantageous for the sale of your labor power are precisely those conditions that are most profitable to capital. This is an unavoidable paradox or contradiction that forms the core material premise of the working class as a class.

All discussion of a society beyond capitalism thus runs into the problem that by setting itself in opposition to capital the premise of the discussion, the abolition of wage labor, is essentially unimaginable to anyone who survives by selling their labor power.

2. “Capitalist realism” has always been the unspoken premise of communism

Ed Rooksby makes an interesting criticism of Mark Fisher on the subject of a post-capitalist society that the latter makes “unconvincing, sweeping claims about the novelty and distinctness of what Fisher terms ‘capitalist realism’”. I find this argument valid.

There has always been a sort of “capitalist realism” — an unspoken assumption in communist thought that capitalism must complete its historical mission before communism is possible. What made Bernstein so distasteful to revolutionaries was his insistence capitalism would peacefully evolve into socialism. Marx obliquely argues against waiting for capitalism to evolve into socialism in the 1870s when he argues for a period of proletarian dictatorship: “Mr Bakunin concludes from this that it is better to do nothing at all just wait for the day of general liquidation — the last judgement.”

Folks like Bernstein and Bakunin, each for their owns reasons, were essentially counseling the working class to do nothing and wait for “the last judgement” — for capitalism to complete its historical mission. In this sense a sort of “capitalist realism”, as Fisher calls it, (the idea there was no alternative but to await capitalism fulfilling  its historical mission), has always been around.

For the most part, this unspoken heresy has been suppressed in revolutionary communist writings and replaced with a sort of political voluntarism. And there have been repeated attempts to expunge it from Marxism dating at least from the late 19th century, when some Russian communists proposed capitalism might be bypassed in Russia. In the run up to the Great War, the critics of revisionism argued capitalism should be overthrown by the proletariat. Waiting for capitalism to “peacefully evolve” into communism was politically indefensible, since it ignored the costs of this strategy in terms of human life.

3. Reform or revolution is a false dichotomy

The objection to this observation might be that the social democrat approach, which accepts the premises of capitalism and wage labor, has in practice led directly to neoliberalism. This objection, however, overlooks the fact that the revolutionary (Leninist) has led to neoliberalism as well. Those who say they want a society founded on communist principles have been unable to realize this goal either by waiting patiently for capitalism’s own peaceful development, (which, by the way, is absurd since capitalism has never been peaceful), or by trying to force the issue by revolutionary measures.

The fact that we cannot imagine a future beyond capitalism really means something far more important than might be at first realized: Since our world exists solely within the boundaries of the capitalist mode of production, a future beyond capitalism can never be anything more than a capitalist future without its present contradictions. To turn Zizek on his head, since we are the product of capitalist society and cannot help but think entirely within the boundaries of this mode of production, and since imagining a world beyond these boundaries is for all practical purposes like trying to imagine a world where we cannot, under any circumstances sell our labor power, the end of capitalism is effectively the same thing as the end of the world for us.

Still, I would argue, however, that ultimately Rooksby is wrong. What Fisher is pointing to is not “capitalist realism” in the sense folks like Bernstein  might use that term to argue the proletariat must wait for capital to finished its historical development; rather, the question raised by Fisher is the historical mission itself. Now that capitalism has raised the productiveness of labor to a level that could not even be imagined in Marx’s time, how will its resolve the inherent contradictions arising from actually accomplishing its historical mission.

6. To be clear: when most communists talk of a future society beyond capitalism, they are really speculating on the future of labor beyond wage labor.

But those scenarios turned out to be bullshit; first in the US, then decisively in the SU. Capital has almost entirely eliminated the need for labor, yet as wage laborers we must sell our labor to survive. But if there is no future for labor beyond wage labor, how can there be any future at all?

With the end of wage labor, effectively the world itself ends for us.