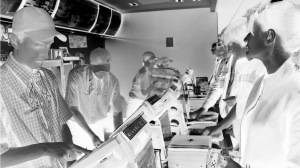 The American Enterprise Institute has published great news for advocates of a higher minimum wage: the new $15 an hour minimum wage law in Seattle has already reduced employment by 11,000 workers.

Says the AEI, a leading neoliberal think-tank, Seattle’s minimum wage increase may be having a negative impact on employment. According to empirical data supplied by the think tank, in the months following an increase in the minimum wage employment began steadily falling just as many economist predicted.

Although many advocates of a higher minimum wage may be disappointed, this news is actually far better than they could have hoped for. Let me explain why.

The AEI explains its findings this way:

“Perhaps it’s too early to tell for sure, and perhaps there are other reasons that we observe such significantly negative effects on three of Seattle’s key labor market indicators last year. However, until the first minimum wage hike last April, all three of Seattle’s labor market indicators had been showing ongoing and strong signs of improvement for the previous five years: the city’s employment had been steadily increasing since early 2010, the number of unemployed workers in Seattle had significantly declined from a peak of more than 33,000 in 2009 to fewer than 13,000 by last April, and the city’s jobless rate had fallen steadily from a post-recession peak of nearly 9% to only 3% by last April (unadjusted). But then each of those key labor market variables for the city of Seattle reversed sharply starting last April when the city started suffering significant job losses, which then contributed to a noticeable spike in the number of the city’s unemployed workers and a sharp jump in the city’s jobless rate between April and December. And each of those three reversals in the nine months of last year were the worst examples of labor market deterioration for each of those variables since the Great Recession.”

Is this data significant?

However, the data may not be as significant as it appears, since, according to the BLS, Seattle has a total labor force of approximately 413,000 person. At best, the AEI can argue raising the minimum wage reduced employment by about 3% of the labor force. In other words, while the minimum wage was increased from $9.32/hr to $11.00/hr — almost 20% — employment fell by only 3%.

The first response to the data provided by the AEI should be, “So what?”

The key determinant of the level of employment is not wages; it is profits. If you want to promote employment, reducing wages below the minimum required for a worker to survive will not accomplish this. This is because no capitalist cares about the level of wages; he only cares that no matter the wages, his profits are at some minimum. Which means, the 11,000 workers identified by AEI statistics did not lose their jobs because their wages were increased, they lost their jobs because, at this new minimum wage, their employers could not make an average profit.

The problem identified by AEI regarding the employment impact of an increase in the minimum wage can be explained by the fact that some definite section of employers can make an average rate of profit only by paying substandard wages to their workers.

I can see no reason why society should tolerate capitalist firms which were so marginally profitable that they have to pay wages below that needed for their workers to survive. These companies should be told to improve their productivity or get out of business.

As an analogy, just imagine restaurants that said they could not make a profit because hygiene requirements were too expensive. Or a power plant that said it would have to go out of business because it could not afford EPA pollution regulations. Or a chemical plant that said it could not remain in business unless it could dump untreated waste water in the rivers. No one would tolerate a company that tried to externalize these costs because it might cause job losses. So why do some economists think companies should be able to externalize the costs of the subsistence of their employees?

Think about this: Should these workers, who cannot live on their earnings, be expected to come to the state with their hands out looking for food stamps and homeless shelters? And who will pay the costs of the programs? Every company nowadays complains of the onerous tax system and lobbies politicians for favorable tax breaks? It would seem these companies either want their employees to starve or want to costs of keeping their employees alive to fall on other workers.

Even if we accept the AEI narrative there is an employment cost to raising the minimum wage, the think tank has not provided any argument for the idea wages should be reduced to increase employment. Even if there is a textbook case for a tradeoff between wages and employment — something which AEI never demonstrates — it does not follow that wages should fall so employment can rise.

An argument on the employment effects of a decent minimum wage like this simply means that minimum wage should not be determined by the goal of full employment. The two issues have to be separated.

If an increase in wages reduces employment, some other way must be found to increase employment, for the simple reason that, in a society where the vast majority of people rely on wages to live, the wage level should not be the sole, or even a significant determinant of employment. As a matter of fact, precisely because so many people depend on wages, wages should never be allowed to play any role whatsoever in determining the level of employment.

Such a policy can only lead to disaster where lower wages (and growing poverty) must be accepted to boost employment.

Now, let me take this argument one step further: the minimum wage should be raised until it reaches a point where it is likely huge job losses must occur.

The minimum wage today is just that: a minimum wage materially necessary for the worker to barely survive physically as a worker. Even a so-called living wage of $15.00 an hour leaves the worker so mired in terrible poverty she is unable to do anything more than barely feed, clothe and house herself — and this only provided she has no children and no medical or other extraordinary expenses.

That this disgusting minimum wage is deemed sufficient by even the most militant advocates of the minimum wage is a testament to how much of our social discourse remains within the bounds of a capitalism crippled by crisis. Despite a massive improvement in the productivity of labor since the Great Depression, in a society that can, with little effort, send a probe all the way across the solar system to Pluto, the Left still argues within the very narrow boundaries of a debate over what it takes to barely prevent a worker from starving to death in the streets.

This is not just astonishing; it is horrific beyond imagination.

Increasing the minimum wage does not cause unemployment

The beginning premise of this discussion must be that with a minimum wage of at least $40 an hour everyone who wants a job has one.

Without a universal basic income and deficit financed full employment to ensure that everyone has a job and a decent income, what other means exist to realize these twin goals? Interestingly enough, AEI’s own empirical data may just indicate how this can be done.

Ensuring that every worker with a job has a decent income is, of course, ensured by setting the minimum wage at a decent level. The problem with the AEI findings is that an increase in the minimum wage to $40 an hours may have a huge impact on employment, because many companies are likely unprofitable on that basis.

So how can employment be maintained so that everyone has a job at $40 an hour?

Simple, you just reduce hours of labor and share the remaining available work among all workers. If an economy where everyone has a decent wage requires a lot less labor, the labor that remains can be divided up among all workers equally.

But note what I just said: We can really only raise wages to a point where everyone with a job has a comfortable (rather than a minimum) life, if we are willing to work far less than we do at present.

How is this possible? How does my argument make any sense? How do higher wages require to less, rather than more, labor? Most of all, how is it possible that by raising the minimum wage of the working class six-fold, the demand for labor falls?

This is not just my argument; it is also the argument of the AEI in their own paper on the Seattle minimum wage. According to that paper, raising the minimum wage reduces the demand for labor. Once the minimum wage increased, the number of hours employers demanded from their employees fell!

If the AEI’s research is correct, a proportional reduction of every employee’s hours was made possible by the increase in their wages. It was never necessary for unemployment to increase simply because the minimum wage increased. All that had to be done was reduce everyone’s hours.

The increase in unemployment in AEI’s data is based on the fallacious assumption that no change could be made to individual hours of labor — that each worker’s hours remained essentially unchanged before and after the minimum wage was increased.

However, if no change was made in each worker’s hours, the only way aggregate employment could adjust to the new level of wages was by leaving a large population of workers unemployed.

The fallacy of aggregate unemployment

The AEI paper makes the absolutely unnecessary assumption that individual hours of labor cannot fall in response to an increase in the minimum wage. In particular, the AEI makes the completely unjustified assumption that less labor demanded means more aggregate unemployment. And then they make the further assumption that higher wages leads to less labor demanded. On this basis they conclude, erroneously, that higher wages must necessarily increase aggregate unemployment, when there is absolutely no justification for this conclusion.

AEI’s entire argument rests on the assumption that employment can only adjust to an increase of wages in aggregate, but never through a proportional adjustment in individual hours of labor. This assumption is entirely fallacious.