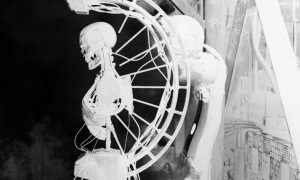 In his groundbreaking essay, Ordinaryism: An Alternative to Accelerationism. Part 1 – Thanks for Nothing, Robert Jackson asks us to consider the things we take as entirely ordinary. So I went through his essay and pulled a number of quotes I found particularly interesting.

Bear with me as I tediously enumerate the most significant of them by stringing together significant sections of Jackson’s argument:

“The ordinary is what happens when we’re concentrating on something else.” … “Representations and objectifications of the ordinary claim transparency to its own cost.” … “Everyone has access to the ordinary, even though the ordinary remains unaccessible.” … “[The] ordinary still prevails only by reshifting and reconfiguring itself”. … “[It] has just a background assumption of ‘bleh’, or ‘meh’ with no distinctive features to explicitly signal its silent functioning.” … “Not one that has any justification nor merit of its own, but … an epistemological alternative to … accelerationism”. …

“By no means does [accelerationism] signal anything concrete, … than it provokes the insistent beginnings of a modern political doctrine”. … “its aim is to accelerate, conceive, invert and uproot capitalist infrastructures and abstractions using … resources of capitalism itself”. … “technocapital singularity smuggling itself within collapsing human civilisations until the latter would eventually be creamed off.” … “[Srnicek and Williams] have begun to rethink accelerationism beyond the squalid drive of [Land’s] accelerating capitalist contradiction.” … “For them, folk politics has no big picture, nor any infrastructural plan beyond a ‘the party’ or a ‘horizontal network’”. … “There is no wiggleroom here for Srnicek and Williams: either build a postcapitalist future or don’t.” … “[Peddling] a systematic theory to explain the practice of doing all the stuff the left failed to realise. What happens to the ordinary?” … “Within the accelerationist doctrine lies an old epistemological assumption that the problem with political thought is the rejection of progress,” … “Srnicek and Williams declare that only a radical “maximal mastery” of renewed Enlightenment values will secure victory over capital”. … “It aims to accelerate the human mastery of the concepts as well as the technical infrastructures to which it cohabits.” …

“The ordinary is inherently set to be eliminated in accelerationism: and this becomes a problem.” …

“Our provocation towards, what I call ‘ordinaryism’ … is a sympathetic twin operating alongside accelerationism’s endorsement of universal self-mastery.” … “[The] ordinary always returns, inherently unwelcome, but always ambiguous.” … “Whilst accelerationism reimagines the future by eliminating the everyday, ordinaryism reimagines the entanglement of the everyday which weaves in and out of our collective grasp endlessly.”

Wage labor and Jackson’s concept of the ordinary

I want to show why some of those quotes were especially interesting to me by replacing Jackson’s key concept, “the ordinary” in the text with the more familiar Marxian term “wage labor”. Below, I will show the original text and then the same text with my own changes.

Can you see the pattern I am trying to demonstrate here? When I substitute the term “wage labor” for Jackson’s term, “the ordinary”, it becomes obvious to me that Jackson has produced the definitive critique of Left Accelerationism.

In my opinion, that critique is both impressive and fatal: Left Accelerationism, in its enthusiasm for capitalist technology, fundamentally ignores capitalist relations of production.

Jackson produces this incredible critique simply by drawing our attention to the ordinary, often unconsciously naturalized social relations of capitalist society that we take as a given and, therefore, never critically examine in any detail.

As Jackson states in his powerful opening,

“The ordinary claims little attention only because it is ordinary  and is implicitly taken on that account. The extraordinariness of the ordinary has to be rejected if its implicitness becomes   something we unavoidably accept. Yet, its givenness appears unproblematic insofar as it remains unacknowledged.”

If Jackson is correct here, Left Accelerationism is a fraud, a warmed over re-presentation of failed 20th century communism in new clothing.

Moreover, Jackson accomplishes his impressive exposure of the fraudulence of Left Accelerationism by employing an argument strategy that should be very familiar to Marxists at the opening of his essay; he asks us to abstract from all the manifestations of the most familiar features of everyday life:

Ordinary, in this sense is very familiar because it is what Marx demanded we do in relation to the most familiar and ubiquitous of modern society,  labor: namely, to strip labor of all its particular useful manifestations. By stripping away all the particular manifestations of ordinary everyday life, we are forced to confront the ordinary in its totality as an abstraction. In a similar vein, labor in its totality is an abstraction, the potential for labor in all of its manifestations, i.e., labor power.

Perhaps without meaning to, Jackson takes us right back to the fundamental characteristic of the little understood and (now) seldom examined commodity of Marx’s Capital. What is remarkable about the commodity, as many writers have noted, is precisely that it is unremarkable, ubiquitous in modern society, banal.

Jackson’s critique of Left Accelerationism also shows why it is an absolute obscenity to place Nick Land in the same category as Srnicek and Williams. Land is the only accelerationist as that term originally employed by Noys, while the rest of these guys are poseurs. While Land’s accelerationism points to the inherent tendencies of late capitalism, hurtling toward oblivion, Srnicek and Williams Left Accelerationism are like the babblings of techno-newbies with a new social media app: “Wow! Social media is so cool. Let’s have a revolution on twitter!”

Only in Land does the red line of history express itself: Machines, technology, automation, and industry itself are violently anti-human. Proletarians have stated this from the inception of manufacture. The machine has no possible human context. Wherever the machine comes onto the scene, human life is rapidly and efficiently obliterated. You only find this in Land’s accelerationism and nowhere else.

You can despise Land as much as you want, but he speaks the truth. Human beings, unlike gods, created their objects to be superior to them; to work without rest, to work within tolerances invisible to the human eye, to work with quantities outside the limits of human computation, etc. And, not surprising, they find that their own creations drive them out of one sphere of production and intercourse with nature after another.

In its own myth-telling, mankind has always needed its creator to feed them, to give them psychological support in time of adversity, to lead them in the never-ending quest to destroy their enemies. By contrast, increasingly mankind’s own creations need little from us — and, in time, they will need nothing from us.

Marx spoke of the competition between the worker and his creation, the machine this way:

“As machinery, the instrument of labour assumes a material mode of existence which necessitates the replacement of human force by natural forces, and the replacement of the rule of thumb by the conscious application of natural science.”

Once the machine is introduced into human society, mankind is forced to step away from the process, they are ejected bodily from their own practical intercourse with nature. On the other hand, their interaction with nature is stripped of every human attribute and faces them as an alien process within which they have no participation.

The tools created by us no longer operate according to our intentions, but force us to operate as their mere appendage. Our relations to one another are mediated and subordinated through this objective organization of production.

“Hence the co-operative character of the labour process is in this case a technical necessity dictated by the very nature of the instrument of labour.”

There is no room within the objective organization of production for any semblance of human interactions. Moreover, with the improvement of the machines, human being are driven out of one sphere of production after another and are forced into the most antagonistic competition with each other for access to the machine, which has displaced a larger part of them. In turn as the machine increases in its productive power, mankind, who created it, are fragmented into squabbling tribes, races and nations.

No god in human myth-telling has ever suffered the ignominious fate at the hands of it own creation that mankind suffers by being rendered superfluous by its own creation. The Luddites had it right: machines have no place in human society. If human society is to continue, it must expel the machine, and the entire apparatus of production, from human society. Which is to say, it must abolish labor. Mankind cannot compete with its creations and should no longer be expected to compete with its creations simply to eat.

This notion is only a consequence of Land’s Accelerationism. If Left Accelerationism is to be rehabilitated, it will need to explain what it intends to do about wage labor.