Schrödinger’s Capital: How the value-form school bet on a dead cat bounce

As I showed in my last post, the classical theorists prior to Marx held that the rate of profit had a definite tendency to fall. Since the capitalist mode of production is essentially production for profit, this immediately raised the question whether capitalism has a definite shelf-life beyond which it must collapse.

Marx had two tasks regarding this alleged tendency: first, to establish whether it in fact existed and why; second, to establish that the falling rate of profit in fact actually limited the life-span of the capitalist mode of production.

The value-form theorist, Michael Heinrich, has produced a critique of Marx’s effort in an essay published in Monthly Review, Crisis Theory, the Law of the Tendency of the Profit Rate to Fall, and Marx’s Studies in the 1870s, in which he argues Marx’s theory is not scientifically valid.

Marx makes two arguments about the falling rate of profit: first, that indeed such a fall was inevitable under the mode of production. Second, Marx shows that this fall is periodically interrupted by crises, which have the effect of momentarily reversing that fall and restoring the mode of production to its normal conditions of operation.

For Marx, in other words, the rate of profit did not simply fall in a straight line to zero. To give an analogy: Instead, the rate of profit fell as if it were a ball dropping down a set of stairs, with each step down followed by a short-term bounce up before continuing down toward zero. If we could visualize this fall, it would look something like this: 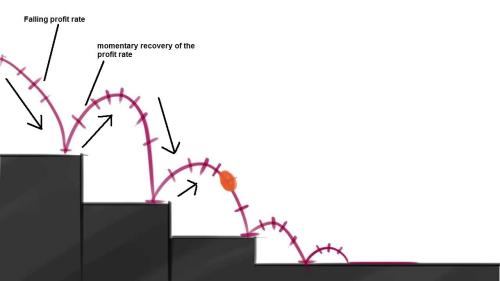 To begin his critique of Marx’s theory, Heinrich then makes this rather bizarre argument:

“With this ‘law,’ Marx formulates a very far-reaching existential proposition, which cannot be empirically proven nor refuted. The “law” claims that a fall in the rate of profit results in the long-term from the capitalist mode of development of the forces of production. If the rate of profit has fallen in the past, this does not constitute a proof—since the law purports to apply to future development, and the mere fact of a fall in the rate of profit in the past says nothing about the future. If the rate of profit has risen in the past, then this is also not a refutation, since the law does not require a permanent fall, but rather merely a “tendential” fall, which can still occur in the future. Even if the law cannot be empirically verified, the argumentative conclusiveness of Marx’s reasoning can be discussed.”

Although he does not expressly state it, Heinrich is essentially making the charge that Marx’s law of the tendency of the rate of profit to fall is not a scientifically valid proposition. Since, in principle, any valid scientific proposition must be falsifiable, Heinrich argues Marx’s theory of the falling rate of profit is not falsifiable and thus does not meet even the minimum requirement for a scientifically valid law.

On what scientifically fallacious proposition is Marx’s theory of the falling rate of profit based?

Then, in an incredible move that defies all logic, rather than following this demonstration up by ripping out Marx’s jugular, Heinrich simply changes the subject!

But are we left to conclude the long term trajectory of the ball cannot be determined?

Even a dead cat bounces when it hits the ground

Speculators have a term for this. They call it a dead cat bounce.

A dead cat bounce occurs when a bear phase (drop) of a stock’s price suddenly reverses into a sharp short rise that draws the suckers in. Like a falling ball down a set of stairs, once the stock’s price declines to a certain point, the price suddenly reverses on itself without warning and starts to rise. Newbies, who misjudge the decline of the stock, thinking it has bottomed, buy into it and get wiped out when the price decline resumes.

To give another analogy, there is a similar concept in quantum physics: a false vacuum. A false vacuum is an apparently stable equilibrium energy state that suddenly gives way to a lower energy state.

As an analogy, think of walking on a lake covered by ice.

The surface of the ice is an apparently stable equilibrium state sufficient to allow you to cross the lake. But, unexpectedly, you suddenly reach a weak point where the strength of the ice is insufficient to support your weight. Without warning you plunge down into the icy water.

Now we could take either these analogies, dead cat bounce or false vacuum, and ask ourselves if these states can be empirically verified.

Heinrich is suggesting there is no way to tell a real long term decline in the rate of profit from an essentially directionless trajectory of the rate of profit. He might be correct about this, but it seems to me this requires more than a simple assertion on his part. There is in fact nothing about Marx’s “existential proposition” that makes it irrefutable in theory, which is essential to any valid scientific proposition.

However, Heinrich doesn’t even attempt to refute Marx on the basis Marx has advanced a proposition that cannot be refuted, because it is vital to Heinrich’s argument we never attempt to verify Marx’s proposition based on the empirical evidence. This is the basic strategy of the value-form school: to avoid having to press their claims against Marx’s labor theory of value with empirical evidence.

Filed Under: Schrodinger’s Capital
Tags: dead cat bounce : false vacuum : law of the tendency for the rate of profit to fall : scientific falsifiabaility

One Comment to “Schrödinger’s Capital: How the value-form school bet on a dead cat bounce”