Can the Greens and Libertarians strike a “Grand Bargain of The Radical Fringe”? 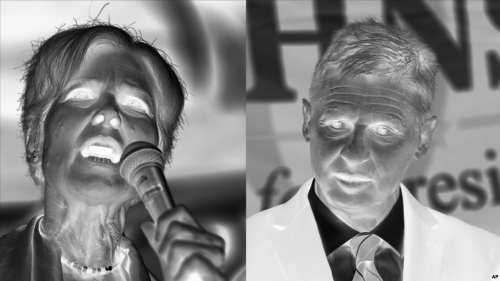 How far apart are the programmatic differences between the Libertarian Party, typically characterized as far Right, and the Green Party, typically characterized as far Left? Could these two parties, the largest formation of what we could call the radical fringe of American politics overcome their philosophical differences and present a united front against the Washington consensus by creating a unified platform?

With the overwhelming majority of the voting population in this election cycle clearly expressing a distaste for the nominees of either of the two major parties, but lacking any realistic alternative to them, this is a question those who see in electoral politics a means for radical change just might want to consider. The closest thing advocates of radical political change have to an alternative to the two fascist parties are radical fringe parties, Libertarians and Greens, who alone have been unable to break through the clutter of lesser-evilism.

To be sure, I do not want to overstate the extent to which these two parties break with the conceptual political framework of existing fascist parties: to put these two parties in some perspective, in comparison to the Marxist and anarchist varieties of communism, the Libertarians don’t go so far as to call for the complete abolition of the existing state; while the Greens don’t go so far as to demand the complete abolition of private property. Both parties implicitly or explicitly accept the continuation of these fundamental categories of bourgeois society. The Greens and Libertarians are radical in relation to the two big fascist parties, but fall well short of a complete break with the assumptions of those parties — they compose a radical fringe of bourgeois politics, not its abolition.

Still within the limits of bourgeois politics, can these parties together accomplish what neither of them has been able to accomplish on their own — break through the clutter of two party politics?

Much of impasse in American politics revolves around the assumed incompatibility of radical Left and radical Right approaches to social issues. However, I will look at four or five very high profile issues on which the Libertarians and Greens are not as far apart as they seem.

The question is relevant because, together, the two parties, drawn almost exclusively from the radical fringe of American politics, would likely start with a national base of support close to ten percent of the voting population. This is a much bigger base of support than the typical candidates for the nomination in the two big parties have in the primaries. An electoral alliance, therefore, could upset all political calculations regarding the 2020 election season.

There is, however, a huge gulf between the two parties that needs to be examined.

At the risk of terribly over simplifying their philosophical differences, which have evolved through decades of discussion and writing involving hundreds of thinkers and thousands of activists, the critical difference between the two parties is the apparently fundamentally incompatible philosophies of each regarding society and the state. For Libertarians the lack of individual sovereignty is identified as the critical problem, while Greens tend to point to lack of democracy.

Not surprisingly, in their approach to politics Libertarians place great emphasis on personal liberty and less emphasis on thinking through the problem of democratic politics where the clash between individual rights and individual self-interests actually take place:

We believe that respect for individual rights is the essential precondition for a free and prosperous world, that force and fraud must be banished from human relationships, and that only through freedom can peace and prosperity be realized. Consequently, we defend each person’s right to engage in any activity that is peaceful and honest, and welcome the diversity that freedom brings. The world we seek to build is one where individuals are free to follow their own dreams in their own ways, without interference from government or any authoritarian power.

By contrast, in their approach to politics the Greens put less emphasis on the problem of personal liberty and more on creating decentralized democratic institutions in order achieve an ideal society defined according to “Ten Key Values”:

Radical reform within the existing state

Despite their differences and the limitations in relation to the fundamental categories of capitalist society mentioned above, both the Libertarians and Greens reflect a profound and growing lack of confidence in the existing state of society, a growing sentiment that it has failed us and is no longer compatible with progress. As such, each reflect in their own specific way the general discontent of members of society with the existing order and each party proposes radical reforms within the existing state to overturn the domination of the two big fascist parties — who are identified here as the source of the failure.

We can divide the proposed radical reform into four principal categories: social issues, domestic policy, national security and economic policy. This is a link to a comprehensive analysis of Libertarian Party Platform. And here is a link to the Green Party Platform. (Both platforms may be slightly out of date.) A close reading of the platforms of the two radical parties will show they agree on as much as they disagree:

The odds against a common agenda for radical reform

Despite their considerable philosophical differences and a huge gulf on some specific policies like social security, affirmative action and free trade, what the Libertarians and Greens agree on constitutes a massive agenda for radical change in the area of social issues, domestic policy, national security and economic policy that would be unthinkable under any Democrat or Republic administration.

To be clear, I am not proposing the Libertarians and Green should get married. My proposal here can be compared to an agreement between two people to remain faithful to one another long enough to have three or four kids and raise them together — in other words, a common platform the two parties could agree to in order to successfully force through radical change within a four year, or even a two year, election cycle.

Reduction of the military by fifty percent, dismantling of US military, putting an end to mass incarceration and police killings of citizens, the abolition of the Department of Homeland Security and an end to the Patriot Act are not chopped liver. They are policies no Democrat or Republican administration would ever commit itself to.

However, despite the breadth of what these parties could achieve together, their culture and political orientation are basically at odds with one another. What they disagree on are rather profound matters of the role government should play in the long run. Moreover, an electoral alliance of this sort would be fiercely attacked and undermined by the two big parties and their hacks in the mass media and among activists. Further, each party is at least in part composed of individuals who routinely move back and forth between the Democrats and the GOP. These wavering elements would be subject to huge pressure from the big parties.

Combine all of this with what are basic differences in political culture and mutual suspicion and even a limited agreement between the Libertarians and Greens seems far-fetched. Any common platform between the two parties would have to be carefully negotiated in the sunshine and ratified by their respective members under terms that call for near unanimous consensus. This is not a discussion to be undertaken lightly or as a matter of electoral expediency. Everyone would have to know exactly what they stand to gain from an electoral agreement and no one in either party can be expected to sacrifice their deeply held philosophical values.

For all of these reasons, an agreement would have to be spelled out in explicit detail on a whole host of issues (organization, structure, nominations, resolution of disputes, etc.) beyond platform, but the process would naturally begin with a common mature recognition of those issues the two parties are in complete agreement on despite their philosophical differences.

But do it quickly; there are only 208 weeks left until the 2020 elections.