Getting to Zero Employment: The problem of unemployment is far worse than you imagine (or they admit) 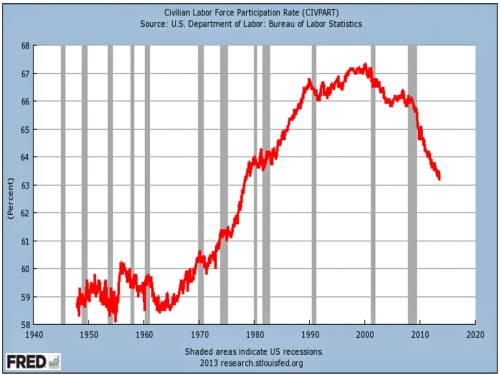 This is the second part of my post, “Getting to zero employment”, a critique of a 2013 book by Dean Baker and Jared Bernstein, Getting Back to Full Employment.

In the first part, I showed that neoclassical economic theory admits there is a very large mass of unemployed that fascist state economic policy tools cannot help using conventional Keynesian (broadly defined) state deficit spending. Baker and Bernstein dispute the size of this problem and the extent to which present unemployment is structural, but they do not dispute the neoclassical assumption that some measure of unemployment is immune to conventional policy. This means even under the most optimistic assumption a fairly large population of unemployment would remain.

END_OF_DOCUMENT_TOKEN_TO_BE_REPLACED

Getting to Zero Employment: The only real bargain working people will get from capitalism 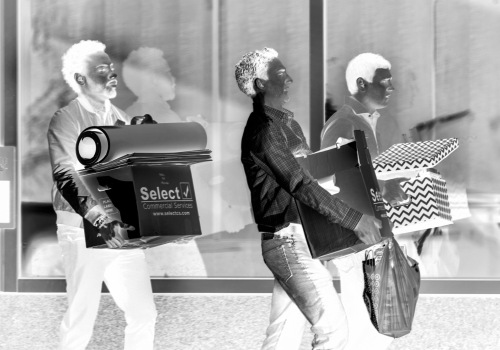 A week ago I spent some time on Mike Beggs worthless article for Jacobin Magazine, Jobs For All. In that article, Beggs referenced a 2013 book by Dean Baker and Jared Bernstein, “Getting Back to Full Employment: A Better Bargain for Working People“. Since Beggs tract was so horrid, I decided to look at this book to see if it offered any improvement over Beggs.

If anything, the book is worse than Beggs article. Nevertheless I soldiered on because Baker and Bernstein seem to have a far better grasp of the limits of fascist state employment policy that one should expect from actual participants in the formulation of that policy. (Bernstein was an economic adviser to Vice-President Joe Biden in the darkest days of the 2008 financial crisis.)

I am going to devote several posts to Baker and Bernstein’s book because it contains rather significant admissions of the limits of bourgeois economic policy — limits with which many may not be familiar, but which demonstrate how little it can affect the massive social ills of 21st century capitalism that many on the Left think can be influenced by political action. END_OF_DOCUMENT_TOKEN_TO_BE_REPLACED

Deepening the Bolivarian Revolution: What options are available to Venezuela?

If you have been keeping up with the news from Venezuela, you probably know the Bolivarian revolution has entered a stage of deep and prolonged crisis. This crisis is not unexpected, since Venezuela has been the target of unceasing opposition and attempted subversion by the United States and the domestic allies among the bourgeoisie.

As The Nation put it:

“The economic crisis in Venezuela, though, is real, and the reporting on it has been stultifying. Shortages are being reported on with glee in the United States, with the takeaway being that the failure of the Bolivarian Revolution is inherent in the idea of the Bolivarian Revolution, in the fundamental premise related to socialism. Latin America has long served as a sharpening stone, on which ideas about what a proper, temperate, and responsible politics and market-based economics could be honed. Want to see where Sanders-style social democracy will lead? Cast your eyes south! Spectacle is always more fun to look at than structure, and despite the current shortage of toilet paper in Venezuela, the fact remains that poverty, inequality, malnutrition, lack of healthcare, and chronic violence in Latin America owe more to the neoliberal structural adjustment policies Ronald Reagan and Bill Clinton put into place than political movements seeking to roll back those policies.”

According to The Nation’s correspondent, Alejandro Velasco:

“I spent five weeks in Caracas. It was worse than I imagined, but not in the way I expected. Most of the coverage has offered up scenes that rival anything coming out of Aleppo or Sudan or the Mediterranean: starving Venezuelans rummaging through trash or getting by on mangos, fleeing to the tune of tens of thousands a day—by raft to Curacao, overland to Colombia, on planes to anywhere they can—fending off outbreaks of malaria and diphtheria, locked in their homes at all times but especially after nightfall. One analyst recently stated that Venezuela’s current crisis is the worst in all of Latin America in the last 35 years. That’s in all of Latin America. Since 1981. No worse crisis. Period.”

“As the government holds on to a thoroughly discredited currency control, for little more reason than to feed the corruption that keeps its inner core afloat, it has basically moved increasingly to dollarize more and more parts of the economy, both formally and informally. Last year it was real estate and auto sales. Now it’s extended to most food items, which are imported as Venezuela’s historic dependence on foreign products has deepened over the last decade plus.”

As of this writing, it is unclear whether the revolution will weather this storm.

As I like to do from time to time, I will spend some time doing a thought experiment on how Venezuela can exit the impasse it now faces. The attempt is not intended to hand out free advice to folks who likely will ignore it anyways, but to clarify in my mind the options available for any movement facing this same situation in the future.

END_OF_DOCUMENT_TOKEN_TO_BE_REPLACED

The genius of Jacobin’s Mike Beggs

I made the mistake of reading this horrible tripe published on the website of Jacobin magazine, Jobs For All, by Mike Beggs, economics genius and defender of the concept of public deficit funded full employment. Don’t bother reading it. Really. It will only depress you. So far as I can tell, after an interminable election year the morons at Jacobin have concluded we need to capitalism harder if we ever want to empower the working class to end capitalism.

According to Beggs, “In an age of precarity, a left-wing demand for full employment could be massively popular. But liberalism can’t deliver it” and hasn’t been able to deliver for four decades:

“Two generations have … come of age in a world where getting a job and building a career is a fierce competition against your peers. Even the winners are anxious. Comfortable spots are precarious; the losers have nothing to blame but their CV. In a buyer’s market it seems like the employers are bringing the goods; they create the jobs, we just work in them.”

This all is changing now as millions have now discovered they need a job to eat and that full employment is critical to changing the relations between the two big classes:

“It is in this climate that the demand for full employment is resurfacing with a vengeance. The importance of full employment is not just that, when people’s subsistence depends on selling their labor power, being unemployed sucks. If that were all, cutting a few percentage points off the unemployment rate would be a worthwhile reform but nothing to build a platform around. The bigger point is that the tightness of the labor market affects the whole working class.”

Although it is far from obvious that liberals, who have been dominating society for 250 years suddenly are dumber than Mike Beggs, it appears that, unlike Mike Beggs, they don’t know just how popular having a job would be in a society founded on wage slavery.

Mike’s one fucking genius to figure that shit out on his own with only a college education.

END_OF_DOCUMENT_TOKEN_TO_BE_REPLACED

Andrew Puzder: An opponent of the minimum wage and a guy the radical Left can do business with

Like you, I couldn’t help but gasp when I read this article from the New York Time this week, Trump’s Labor Pick, Andrew Puzder, Is Critic of Minimum Wage Increases:

“President-elect Donald J. Trump on Thursday chose Andrew F. Puzder, chief executive of the company that franchises the fast-food outlets Hardee’s and Carl’s Jr. and an outspoken critic of the worker protections enacted by the Obama administration, to be secretary of labor … Mr. Puzder, 66, fits the profile of some of Mr. Trump’s other domestic cabinet appointments. He is a wealthy businessman and political donor and has a long record of promoting a conservative agenda…

If the radical Left had any sense, they would meet with Puzder to figure out how to eliminate all wage labor in the fast food industry in the next four years. Puzder is banking on the expectation the Left will be so worried about jobs going away they will accept anything he proposes short of that.

Mind you, I’m not being the least bit facetious here. Poverty mainly affects the low wage, low skilled labor force, the industries that are reliant on this sort of labor is constantly creating poverty in the society and Puzder is the face of capital in these sectors, as the New York Time article shows:

END_OF_DOCUMENT_TOKEN_TO_BE_REPLACED

This morning, Senator Ben Sasse broached the subject no one wants to talk about: Wage slavery is going away and there is nothing that can be done to prevent this. I aggregated his tweets to summarize his major points:

“Morning news pretends there’s a simple political solution to the declining # of manufacturing jobs. It’s not true. We should tell the truth. Automation–even more than trade–will continue to shrink the number of manufacturing jobs. This trend is irreversible. Politicians are not good at telling the truth. We should tell the truth, even when it is unpopular – for example, about coming job changes. We should be honest that there will be more, not less, job change in the future. We should be encouraging prep for disruption & retraining. US economy is adding approximately 2 million jobs per year. It’s not nearly enough.

In thinking about manufacturing job change, consider history of agriculture:

US manufacturing output continues to be strong. But it’s with fewer people (as in agriculture). [This is because we’re] more productive.

Imagine being a powerful bourgeois politician in the most powerful nation on the planet, but you have to openly admit there is nothing you can do to keep wage slavery from going away.