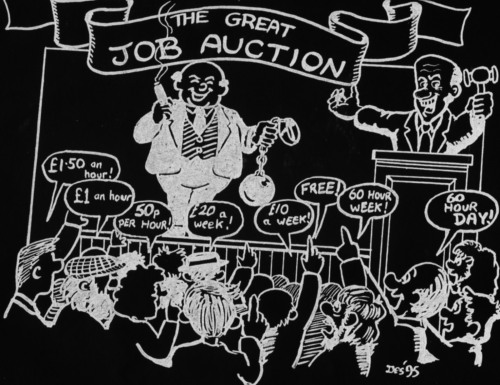 The economic argument for communization made by the rockets scientists from Endnotes is weakened because, despite their assertion that, “Communism necessitates the abolition of a multifaceted relation that has evolved over time”, they appear to think that, “to abolish it simply means that we cease to constitute value, and it ceases to constitute us.”

Now, I may be missing some subtlety, but this idiocy is stated as if 7 billion people can simply flip a switch and abolish all present relations, replacing them with new communist relations. In other words, if communism and capitalism were represented in a Venn diagram, the categories, communism and capitalism, do not overlap. The brainiacs at Endnotes tells us that this is now the only way we can conceive of the transition from capitalism to communism.

In my opinion, communization is posed this way by our friends at Endnotes most likely not to theoretically facilitate a communization movement, but to obscure Marx’s fundamental theoretical argument. This is a strong charge, I know. But I will demonstrate it by examining the argument made by Aaron Benanev and John Clegg, in their essay, On the Logic and History of Surplus Populations and Surplus Capital.

The two academics begin their discussion by restating what they seem to think is Marx’s basic argument. That argument goes something like this:

The essential precondition for capital is the exchange of ‘work’ for wages. This essential precondition is enforced when the working class lacks any means to life and is forced to exchange their ‘work’ for wages from capital. The separation of the worker from the means of life must be reproduced in order for capital and the worker to meet in the market time after time. The reproduction of the wage labor-capital relationship is thus maintained by a material economic compulsion. This, say the writers, is the exploitation of wage-workers. Together, the workers can purchase only a portion of the goods they produce. Capital prevents the workers from leaving the relation by appropriating a portion of the product of the labor produced by the workers as capital. The accumulation of capital includes both the sphere of production and the sphere of consumption.

Capitals must accumulate, or they will fall behind in the competition with other capitals. Competition among capitals leads to divergent profit rates. This, in turn, drives efficiency-increasing innovations among the capitals. By reducing their costs below the sectoral average, capitals can either reap super profits, or lower prices to gain market share. But falling costs will in any case lead to falling prices: competition and the mobility of capital between sectors results in an equalisation of inter-sectoral profit rates. As the movement of capital in search of higher profits drives supply up and down, returns on new investment fluctuate around an inter-sectoral average. The movement of capital between sectors spreads cost-reducing innovations — establishing a law of profitability which forces all capitals to maximise profits. Conversely, when profitability falls, there is nothing that can be done to re-establish accumulation short of bankruptcies of capitalist firms and unemployment, which reestablish the conditions of profitability.

Such crises, however, while they may restore profitability, cannot ensure expanded reproduction of the capital-wage labor relationship. This relationship requires new industries and new markets. Prices fall as labor-saving innovations are introduced, while market for existing products expand. This expansion raises profits, which encourages investment. In time, the market for commodities is once again saturated. Profits again fall. With this cycle of expansion and contraction, a portion of the existing capital and workers are shed by capital and taken up elsewhere in new industries, especially in new lines of production. When cycles of expansion and contraction coincide among several lines of production, which periodically happens as they often rely on the same innovations, recessions erupt. This recession paves the way for a new period of expansion.

If you have been following this summary of the argument made by Benanev and Clegg carefully, you will note that the two academics neatly excise Marx’s core argument from the process of capitalist production he described in Capital. This leaves us with a model of capitalism that can be found in any freshman bourgeois economics textbook. In this model the costs and prices of production do not fall because less labor is employed in the production of each commodity, but because competition drives innovations that increase “efficiency” and lowers both costs and prices.

In fact, the term “value”, and its corollary term, “socially necessary labor time,” cannot be found anywhere in this alleged restatement of Marx’s model of capitalism. In place of the progressive reduction of the socially necessary labor time required for the production of a commodity as the productivity of social labor increases, and with this the fall in the value contained in each commodity, the bumbling charlatans at Endnotes tell us about the increasing “efficiency” of capitalistic innovations driven by competition. Prices do not fall because the values of commodities fall, they fall because competition among capitals force each capital to pass on lower prices as costs fall.

The brainiacs at Endnotes realize there is something missing from this freshman economics textbook presentation, so they try to distance themselves from it:

The bourgeois economist Joseph Schumpeter described this process in his theory of the business cycle.12 He noted that the contraction of older lines rarely happens smoothly or peacefully, that it is usually associated with factory closures and bankruptcies as capitals attempt to deflect losses onto one another in competitive price wars. When several lines contract simultaneously (and they usually do, since they are based on linked sets of technological innovations), a recession ensues. … Many Marxists have espoused something similar to Schumpeter’s conception of cyclical growth, to which they merely add the resistance of workers (or perhaps the limits of ecology) as an external constraint. Hence the Marxist notion of crisis as a self-regulating mechanism is complemented by a conviction that crises provide opportunities to assert the power of labour (or correct the ecologically destructive tendencies of capitalism). In these moments, “another world is possible”. Yet Marx’s theory of capitalism contains no such distinction between “internal” dynamics and “external” limits. For Marx it is in and through this process of expanded reproduction that the dynamic of capital manifests itself as its own limit, not through cycles of boom and bust but in a secular deterioration of its own conditions of accumulation.

The model above, say these morons, might explain the cycles of booms and busts that afflict the capitalist mode of production and constitute the bourgeois conception of that mode of production. What the model cannot explain is why, over time, there is what these academics call “a secular deterioration of the conditions of accumulation”. The model may explain why, periodically, there is too much capital and too many workers, but it cannot explain what these morons need to explain: why a growing surplus population of wage workers and a growing mass surplus capital become an secular feature of the mode of production.

It is this latter tendency that appears to form the basis of Endnote’s argument for communization.

These two clowns, Benanev and Clegg, know this model can no more explain a secular deterioration of the conditions of capitalistic reproduction than the model found in an first year micro textbook. What is worse, it is widely acknowledged that Marx never even bothered to produce a theory of crisis; apparently never thinking it was necessary for his purpose in writing Capital. To this fact, we can add that Marx also never produced a theory of secular deterioration of the conditions of accumulation as the writers allege.

So what did Marx leave behind for us? The answer to this question can likely be found in chapter 15 of volume 3 of Capital; a chapter that serves as the basis for much of the argument in the Endnotes argument:

“The rate of profit is the motive power of capitalist production. Things are produced only so long as they can be produced with a profit. Hence the concern of the English economists over the decline of the rate of profit. The fact that the bare possibility of this happening should worry Ricardo, shows his profound understanding of the conditions of capitalist production. It is that which is held against him, it is his unconcern about “human beings,” and his having an eye solely for the development of the productive forces, whatever the cost in human beings and capital-values — it is precisely that which is the important thing about him. Development of the productive forces of social labour is the historical task and justification of capital. This is just the way in which it unconsciously creates the material requirements of a higher mode of production. What worries Ricardo is the fact that the rate of profit, the stimulating principle of capitalist production, the fundamental premise and driving force of accumulation, should be endangered by the development of production itself. And here the quantitative proportion means everything. There is, indeed, something deeper behind it, of which he is only vaguely aware. It comes to the surface here in a purely economic way — i.e., from the bourgeois point of view, within the limitations of capitalist understanding, from the standpoint of capitalist production itself — that it has its barrier, that it is relative, that it is not an absolute, but only a historical mode of production corresponding to a definite limited epoch in the development of the material requirements of production.”

Somehow, the Mensa members at Endnotes managed to miss Marx’s essential argument in chapter 15 of volume 3:

Capital, itself, unconsciously creates the material conditions for communism.

The most powerful argument for communization is that even if the working class failed to overthrow the existing state and replace the state with its own association, capital itself is busily creating all the necessary conditions for a fully communist society. A growing population of surplus workers and a growing mass of superfluous capital was not just “a secular deterioration of [capital’s] own conditions of accumulation.” More importantly, it was leading to the complete abolition of wage labor in the production of material wealth and a society founded on the principle of, “to each according to need.”

It has to be noted that in the above passage, Marx nowhere introduces the notion of class struggle or the political action of the working class to make his case. Even in the absence of what the writers call “the resistance of workers (or perhaps the limits of ecology) as an external constraint”, this process unfolds unconsciously solely driven by the process of capitalistic accumulation itself.

In the Endnotes freshman economics textbook model, Marx’s argument has been neatly excised. As I will show, next the writers then graft on a purely Keynesian appendix to their crippled model that proves capitalism can last forever.