If we consider the two most important commodities in the capitalist mode of production, labor power and gold, side by side, we can see that the prices of the two have clearly followed very different trajectories since 1970:

The difference is so stark in fact, that the dollar-denominated price of labor power appears hardly to have changed at all, when in fact it has risen five-fold, from $1.45 to $7.25, over the period covered by the chart. The increase in the minimum wage, although 500%, is nowhere near the astonishing increase in the price of gold, which has, during the same period, increased by more than 3500%.

It might be said that gold is unique in this regards, but this would be wrong. Let’s look at another group of market transactions that seem to defy the modest inflationary performance of minimum wage since 1970 — the stock market.

Here are the price performance of three major indices that have all done better for their owners than wage labor has done for workers.

First, we have the Dow Jones Industrial Average, a stock market index that, according to Wikipedia, tracks the value of 30 large, publicly owned companies based in the United States, and how they have traded in the stock market during various periods of time. The value of the Dow is the sum of the price of one share of stock for each component company. Like the wage goods in basket of the Consumer Price Index, the companies forming the index change over time as the so-called economy evolves. 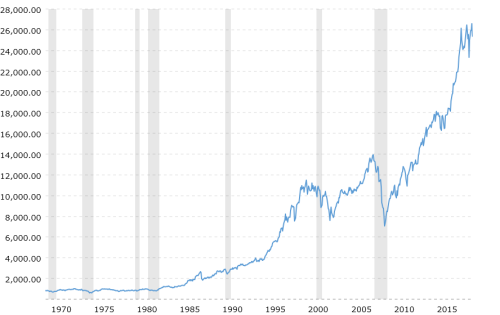 Second up is the Standard & Poor 500. According to Wikipedia, The S&P 500 is an index based on the market capitalizations of 500 large companies having common stock listed on the NYSE, NASDAQ, or the Cboe BZX Exchange. It differs from the Dow Jones Industrial Average (although it includes all 30 companies of the DJIA) and the NASDAQ Composite index, because of its diverse constituency and weighting methodology. It is one of the most commonly followed equity indices, and many consider it one of the best representations of the U.S. stock market.

Last, but not least is the Wilshire 5000 Price Index, which, according to Wikipedia, is a market-capitalization-weighted index of the market value of all US-stocks actively traded in the United States. If there is a thing as the total national capital of the United States, this index is probably its closest proxy.

What these three indices have in common, in addition to their similar trajectories over the period, is their apparent consistency: the 2019 value of each index is more or less 30-33 times the 1970 value of that index. While the three indices no more appear to track the so-called market price of gold on a year to year basis over the same period than the minimum wage, they appear to track gold far better than the minimum wage earner in the long run.

Below is what the so-called price of gold looks like over the same period:

And finally, the federal minimum wage:

How are we to explain the divergence in prices inflation between wages, gold and the stock market?

There was a very interesting article written by the Education Committee of The Socialist Party of Great Britain in 1974 on the so-called Marxian theory of inflation that makes three points about inflation:

As to the third point, the anonymous writer makes this statement that calls into question proposition three:

“Governments can replace gold in circulation by paper and metallic tokens. They can also issue, if they choose, tokens with a higher face-value than the needed amount of gold expressed in the same conventional money-unit. But if a government does do this, the effect will be the same as with debasing the currency: real economic forces, independent of their will, will change the weight of gold named by the money-unit or, as Marx put it, will forcibly place “the tokens of value on a par with the quantity of gold which they are supposed to replace in the sphere of circulation”. Another name for this process, which results in a general rise in prices, is inflation.”

“Although inflation is caused by an excessive issue of inconvertible paper money over and above the amount of gold which would otherwise circulate, in Britain the government does not simply print more notes and use them to pay for its activities. The effect of what they do do is much the same though, but it works in a much more roundabout way.

“Government expenditure is financed first of all by taxation, then by borrowing and finally, as we shall show, by issuing more inconvertible notes. In Britain in recent years there has always been a budget surplus, i.e. tax receipts have always exceeded the government’s current expenditure on defence, social services, costs of administration, etc. But this surplus has never been sufficient to fully cover the government’s capital expenditure (which is not included in the budget) on loans to nationalised industries and local authorities to finance long-term investment projects. Therefore the government has had to resort to borrowing. This it does by selling government bonds, including interest-bearing Treasury Bills. These Treasury Bills are repayable after a very short periods, normally three months; they play a key role in the overissue of inconvertible paper money in Britain.”

Two things should be said about these passages from the anonymous writers for the Education Committee of The Socialist Party of Great Britain:

First, it should not be necessary to remind my readers that recent political discussions within both the Democrat and Republican parties under the heading of modern monetary theory have gone well beyond this rather naive view of sovereign monetary power from 1974. Today, many on the radical Left of the Democrats argue that, in the aftermath of the collapse of Bretton Woods, certain states face no financial constraints whatsoever.

Second, it should not escape the attention of my readers that while inflation presupposes that the state has deliberately severed the connection between the standard of prices and the state-issued currency and thus no longer maintains the value represented by its national currency at some fixed weight of a commodity money as assumed by Marx in Capital, the state also legally establishes the minimum wage. If the minimum wage has failed to keep pace with the depreciation of the purchasing power of the national currency, this is by no means an accident; it is a political decision.

Here is the value represented by the minimum wage since 1970: 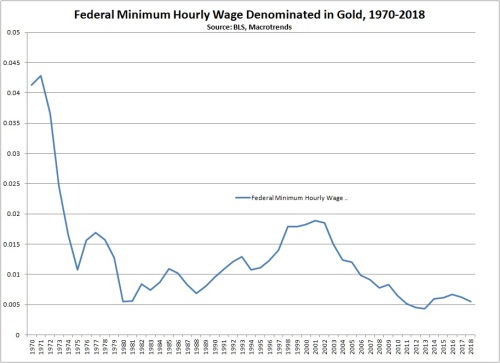 And here is the value of the S&P 500 for the same period:

One thing that should grab your attention is the period at the end of the two charts from 2008-2018 and in particular the period after 2011, when quantitative easing, so-called unconventional monetary policy, was in full effect. Even as wages kept falling, the S&P bottomed and began rising to more than double its value relative to gold.

That is not a mistake.

For seven years, Washington drove the S&P 500 to a new post-crisis high by buying worthless financial assets even as the state held wages flat at $7.25 in nominal dollar terms and let them slide in gold terms.

My third conclusion is as follows:

If inflation is defined as a sustained change in the general price level over some period of time, it must be explained how this inflation arises. It must further be explained why this inflation takes the form of an appreciation in certain prices and not in others. Historical evidence appears to confirm that inflation has its origin in political causes, not monetary causes. It is express mainly in the appreciation of the prices of gold and other financial assets, not labor power and wage goods.

This would suggest, contrary to mainstream bourgeois economic theory, that the state is deliberately intervening to raise the prices of capitalist assets, while simultaneously suppressing the wages of the working class.

Inflation is class war fought by other means.