I just finished reading this article by Michel Husson & Stephanie Treillet on the significance of labor hours reduction, Liberation Through Vacation. I want to offer some thought on why I think it is, on 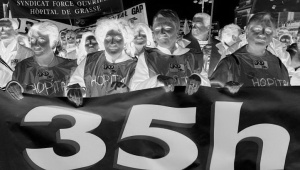 the whole, as important as it is disappointing. I make these points, not because I disagree with what I think was the intended thrust of their article, but because certain folks will go after Husson’s and Treillet’s argument. For instance, A. Kliman has already taken David Graeber and others to task for their weak arguments on labor as just another attempt to rebrand social democracy. (See Kliman’s, Post-Work: Zombie Social Democracy with a Human Face?) My point here is to expose weaknesses in their argument because Husson and Treillet’s main thrust is, after SYRIZA’s election, the most important development to emerge from the crisis in 2015.

END_OF_DOCUMENT_TOKEN_TO_BE_REPLACED 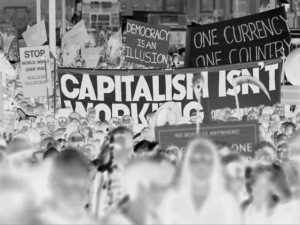 One of the biggest influences on my study of labor theory in recent years was this short 2008 article: “The market no longer has all the answers” in, of all places, the Financial Times. In the article, Michael Skapinker announced, with just a hint of schadenfreude, that neoliberalism had finally fallen and couldn’t get up:

“One of the most arresting comments of the past week came from Josef Ackermann, chief executive of Deutsche Bank. ‘I no longer believe in the market’s self-healing power,’ he said in a speech in Frankfurt.

You may dismiss this as namby-pamby Euro-speak from the Swiss-born head of a German bank, except that no one, anywhere, appears to believe in the market’s self-healing power any more.”

That was the good news.

END_OF_DOCUMENT_TOKEN_TO_BE_REPLACED

Who can read Piketty’s gloss on Kuznets, Malthus and Ricardo in his introduction and not wonder if he read as little of them as he read of Marx?

I can imagine a replay of his New Republic interview:

INTERVIEWER: “Can you talk a little bit about the effect of Kuznets, Ricardo and Malthus on your thinking and how you came to start reading them?

INTERVIEWER: “Some of their essays, but not the economics work.”

PIKETTY: “I think, they are very difficult to read and for me they were not very influential.”

INTERVIEWER: “Because your book, obviously with the subject matter, it seemed like you were tipping your hat to them in some ways.”

PIKETTY: “No not at all, not at all! The big difference is that my book is a book about the history of capital. In the books of Malthus and Ricardo there’s no data.” 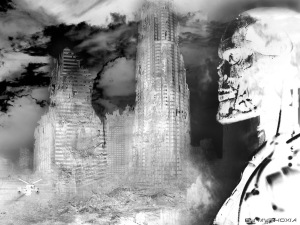 END_OF_DOCUMENT_TOKEN_TO_BE_REPLACED

Can state deficit spending be used to artificially add to the mass of profits? And if so, would deficit spending account for the rather ambiguous (even contradictory) results labor theorists’ produce when they try to empirically substantiate Marx’s thesis on the falling rate of profit?

In his 2013 paper, the Australian labor theorist, Peter Jones, provided a persuasive argument that the fascist state can indeed augment or subsidize the rate of profit through its deficit spending. And he argues this capacity can explain much of the ambiguous results labor theorists have produced over the last three decades as they attempt to empirically demonstrate or disprove Marx’s argument on the role played by the falling rate of profit in capitalist crisis.

According to Jones, government borrowing mystifies economic relations by making it appear as if the state can consume surplus value without reducing either profits or wages. If labor theorists do not account for this false appearance, they are implicitly accepting the Keynesian assumption embedded in mainstream economics that government borrowing can create new surplus value.

In his 2012 paper, “Could Keynes end the slump? Introducing the Marxist multiplier”, Gugliemo Carchedi discussed how Keynesian deficits spending works and, like Jones, concluded this deficit spending cannot create money (or, more accurately, value) out of nothing. However, he went one step further: Carchedi argued that once the state began to repay its debt, it would have to raise taxes for this purpose. Whatever additional ‘demand’ the state created by deficit spending during an economic downturn would turn out only to be deferred taxation on the population. Essentially, since the state is not a producer of commodities, it could only bring spending forward; this credit funded ‘prosperity’ would have to be repaid at some point by higher taxes.

Carchedi’s argument may or may not be correct in the long run, but Jones’ paper suggests Washington has been able to run deficits — and, therefore, artificially prop up profits — over a fairly long period of time without running into the need to balance its budget. For more than thirty years, the US has been able to spend more than it takes in without apparent difficulty or obvious limits.

END_OF_DOCUMENT_TOKEN_TO_BE_REPLACED

Does the collapse of the gold standard and the switch to commodity money have any implications for labor theory? The Brazil labor theorist, Paulani argues it does not:

“when, historically, the umbilical cord that linked the money form to the commodity form was cut (in 1971), the dollar value of goods shifted in relation to other currencies, but they kept between themselves the relations which their labour values (prices of production) produced earlier, backed in gold…”

According to Paulani, then, the prices of commodities may have no longer been convertible into gold after 1971, but they did not shift relative to each other. If, before the collapse of the gold standard, four candy bars exchanged for one pair of

socks, this much remained unchanged afterwards. Whether this is true is not the point, since, stated in this simplistic form, it can easily be disproven; however, many such changes can be written off to supply and demand “shocks” of one sort or another. Since any such shock is accidental, Paulani’s argument can be reduced this: whatever change did occur, they were accidental and did not result from the collapse of the gold standard. In fact, since relative prices fluctuated constantly even before the collapse of the gold standard, this is a reasonable explanation.

However this argument by Paulani in her 2014 paper is directly challenged by Peter Jones in his 2013 paper, The Falling Rate of Profit Explains Falling US Growth”. Jones argues the collapse of the gold standard directly explains the difficulty labor theorists are having substantiating Marx’s falling rate of profit thesis.

END_OF_DOCUMENT_TOKEN_TO_BE_REPLACED

As I explained in my last post, substantiating Marx’s falling rate of profit as the cause of capitalist crises, and, in particular, as the cause of the so-called great financial crisis of 2008, runs into the difficulty that Marx made his argument on the basis of values. The difficulty this poses for analysis is that, since 1971, the various categories of analysis employed in measuring the rate of profit are denominated in inconvertible fiat dollars. Fiat dollars are not money in themselves, but tokens — 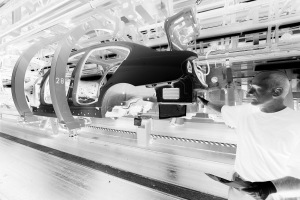 placeholders — for commodity money. Prices denominated in this inconvertible fiat, therefore, are not values in the sense Marx employs this term throughout Capital.

Thus, in order to construct an empirical proof of Marx’s thesis on the causes of capitalist crises using the empirical data, labor theorists are forced to convert inconvertible fiat prices into Marxian values. This is a new problem that did not exist before the period between 1933 and 1971 when the gold standard began to come unraveled. Since the dollar was pegged to some definite quantity of gold, dollars prices represented some definite quantity of gold as well. After the collapse of Bretton Woods in 1971, however, this relationship was severed and the dollar’s exchange rate with gold was allowed to float.

The question immediately arose whether Marx’s theory applied in the case where the currency used in daily transactions no longer had any fixed and definite relation to commodity money. Since the quantity of fiat in circulation has always been determined by the state, not by the values of the commodities in circulation, was it not the case that the socially necessary labor time required for production of commodities (value) no longer determined how a capitalistic economy functioned?

END_OF_DOCUMENT_TOKEN_TO_BE_REPLACED

One of the little discussed problem with Andrew Kliman’s attempt to empirically verify Marx’s falling rate of profit thesis is that he is working with inconvertible fiat dollars (dollars which no longer can be redeemed for gold) and dollar prices — in the form of GDP, wages, profits, etc. — and these prices are not labor values as Marx defined the term. How Kliman handled this problem in his analysis of the empirical data is a story in itself. 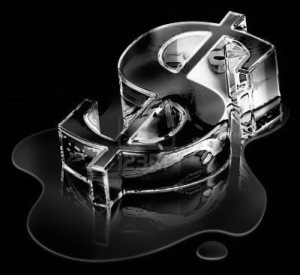 In his paper, “The Law of the Tendential Fall in the Rate of Profit as a Theory of Crises”, Gugliemo Carchedi answered critics who argue the falling rate of profit thesis cannot be empirically substantiated because Marx was discussing values not prices in his thesis. Fiat prices, however, are not values and have no relation to the values or socially necessary labor times required to produce commodities.

END_OF_DOCUMENT_TOKEN_TO_BE_REPLACED

The phony debate over investment and the cause of crisis

One of the biggest controversies among labor theorists when it come to calculating the rate of profit is whether the profit rate should be calculated based on the original amount of capital laid out by the capitalists minus depreciation or the current cost of replacing this capital. For example, assume I bought a widget machine for 100 dollars last year. Assume also that since I bought this machine, the price of widget machines fell from 100 dollars to fifty dollars. When I calculate my profit do I do this based on my original investment of 100 dollars or on the basis of the current market price of fifty dollars?

END_OF_DOCUMENT_TOKEN_TO_BE_REPLACED

I have been looking at the numbers in this very interesting paper by Carchedi: “The Law Of The Tendential Fall In The Rate Of Profit As A Theory Of Crises”. I decided to test his 12 reasons why the falling rate of profit is the best explanation for the financial crisis of 2008 — not because I disagree, but because I think he makes a poor case for it. I thought I might go over his material in order to get an idea of how far off his calculations are when measured against a commodity money as Marx used in Capital. The problem, however, is that, so far as I can tell, Carchedi has not published the source data he used to arrive at his conclusions in the paper. (It is possible he published it in a different place, but I just haven’t come across it yet.)

Fortunately, an argument similar to Carchedi’s is also made by Andrew Kliman in his 2011 book, ‘The Failure of Capitalist Production’. And, unlike Carchedi, Kliman generously published a comprehensive spreadsheet of his source material compiled while writing his book. So, with this post, I am going to kick off a comprehensive review of Kliman’s empirical argument for the falling rate of profit thesis.

END_OF_DOCUMENT_TOKEN_TO_BE_REPLACED

The problem of prices and profit and of the relation between the two, which has bedeviled the simpleton economist for two hundred years, has reared its ugly head again in a series of posts amounting to a food fight among bourgeois 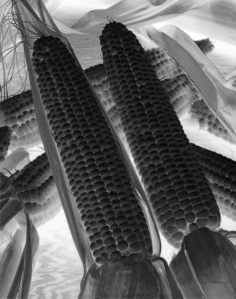 simpletons. The question raised in the exchanges, which I have previously covered here, involves the question of the source of profits in the capitalist mode of production and the interrelation between profit and prices.

At stake is far more than is apparent in the obscure criticism raised by heterodox economists against the mainstream neoclassical school that the neoclassical school wants to determine profit by the marginal productivity of capital, and then calculate the quantity of capital in part by asking how profitable it is to own the capital goods. If prices and profit are dependent on each other in this way it calls into question the historical trajectory of the mode of production itself.