The Weird Netherworld of Barbarism

Based on the assumptions Marx employs in Volume 3, superfluous labor time should not exist under capitalism. At the same time, the mode of production is the production of surplus value, i.e., labor time that is superfluous to society.

END_OF_DOCUMENT_TOKEN_TO_BE_REPLACED

In section 3 of the Apotheosis of Money, Robert Kurz takes on a problem that has been discussed by Marxists for almost 80 years. The discussion is important because, I believe, its conclusions will have more to say about what a post-capitalist society actually looks like than any of the issues typically raised by the Left:

“it is clear that, taken as a whole, the share of those unproductive workers (viewed from the perspective of surplus value production) who only represent social consumption, that is, “overhead costs”, is constantly increasing.”

Another way to state this is that an ever increasing share of the total labor time of society is being wasted on unproductive labor —   an issue raised by David Graeber in his recent essay, On the Phenomenon of Bullshit Jobs.

Kurz’s essay is significant to me, because if, as I think, communism is free time and nothing else, society seems to be preparing for just this possibility. The collapse of capitalism will likely appear, as it did in the Soviet Union, as a crisis in the form of massive unemployment, which locks billions out of the labor market, making it possible for the social producers to eliminate most work in a single stroke. The preparation for a society founded on free, disposable time for the many, who can use this free time for self-activity in whatever way they want, may just be taking the form of an ever increasing quantity of labor time that is being unproductively expended by capitalist firms.

END_OF_DOCUMENT_TOKEN_TO_BE_REPLACED

What if there is no such thing as a socialist “economy”? 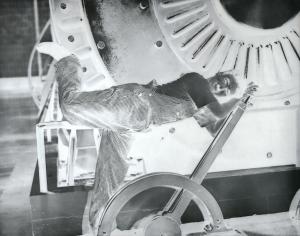 According to a post on the NorthStar blog by Gavin Mendel-Gleason and James O’Brien, at least part of the problem socialism has gaining purchase among the working class is that socialists have difficulty describing what it will look like:

“Nothing springs from the naked void fully formed. We need to examine the best avenues open to us for changing our current social direction into a society we would like to bring into existence.”

This is creating a problem for socialists, because, as the writers explain, socialists have so far been unable to coherently describe the society they propose to replace the present mode of production:

“Socialists are often loathe to get into the exact details of what a socialist economy would look like. This is caused, perhaps in equal measure, by complete ignorance and an extensive knowledge of just how large the space of possibilities is. Indeed many proposals have been given about how a socialist economy might best be run.”

And here, of course, the problem only gets worse.

END_OF_DOCUMENT_TOKEN_TO_BE_REPLACED

Andrew Kliman on David Graeber and The “Post-Work” Society

I am going to spend some time comparing the approaches of Andrew Kliman and Robert Kurz to the problem of abolishing labor. Andrew Kliman’s contribution to this discussion is “Post-Work: Zombie Social Democracy with a Human Face?” and is presented in the form of a critique of the writers, John Quiggin, Peter Frase, Chris Maisano and, in particular, David Graeber’s essay on “bullshit jobs”. While Robert Kurz’s contribution is “The Lost Honour of Labour” — a critique of orthodox Marxism’s view of labor itself, of which Kliman’s critique can be considered an example.

Briefly stated, the difference between the two labor theorists can be summarized as follows: For Andrew Kliman a reduction of hours of labor is not compatible with the capitalist mode of production. For Kliman then, only with socialism does it become possible to take advantage of technology to reduce labor for the great mass of society.  While for Robert Kurz, communism itself is not possible within the epoch of labor.  It is, from Kurz’s point of view, impossible for socialism to exist so long as the great mass of society labors.

END_OF_DOCUMENT_TOKEN_TO_BE_REPLACED

The whining Left suffered a mild paroxysm last night when the EBT card system failed. Suddenly they were forced to consider the possibility that their dependence on the fascist state just might lead to widespread crisis. If people are dependent on handouts from the capitalists, something as insignificant as a minor systems failure could threaten millions.

Since the EBT system is run for profit, the managers are forced to spend no more on maintaining it than they do maintaining the roads. They must in this area expend no more labor on maintenance than is socially necessary if they want to fatten their bottom line. When the system went down, thousands of families across the nation, who were lined up in queues, could not complete their purchases.

Rather than calling into  question such a fragile system of subsistence, the Left decried the Right for its direct or indirect role. Was this a result of the shutdown? Had the states in question turned off their support? It turned out that it was a “system glitch”, not an act of terrorism by the Tea Party. Still, many on the Left noted the voices on the Right for whom the failed EBT system became a point of entertainment. The Left was angered by this silly display of a lack of empathy with those having no resources but fascist state handouts.

END_OF_DOCUMENT_TOKEN_TO_BE_REPLACED

Wolff: You see communism is just like capitalism except its Christmas Eve all the time

Here is a shorter version of this DEFENCE OF MARXISM post:

The aim of communism is to make labor pleasant and more productive.

In this crisis, we have the opportunity to speak to people about an entirely new world of possibilities. For some really stupid communists, this means everything would be exactly like it is now — only ‘better’.

END_OF_DOCUMENT_TOKEN_TO_BE_REPLACED

According to Justin Fox, a paid apologist for capital at the Harvard Business Review, the difference between the Great Recession and the Great Depression can be summarized in a single chart. Fox explains his perverse reasoning:

“Basically, if you think this downturn was comparable in origin and inherent severity to the other recessions since World War II, then we’ve been the victims of economic-policy bungling of epic proportions. If, on the other hand, you think the proper comparison is the Great Depression, the last U.S. downturn brought on by a severe financial crisis, you’d have to say the White House, Congress, and most of all the Federal Reserve have done an absolutely brilliant job relative to their early-1930s counterparts. I’d lean toward explanation No. 2 — we did actually learn something from the Great Depression, although probably not enough.”

So, apparently, we have a choice of standards by which to measure the severity of the present crisis: the official unemployment data provided by the Bureau of Labor Statistics. Unemployment during the Great Depression, which involved a greater percentage of the wage labor population than the present depression. Or the level of unemployment in the post-war period, including the depression of the 1970s, when employment actually increased over the whole of the depression.

Guess which one Justin Fox, of the capitalist mouthpiece the Harvard Business Review, wants to use.

END_OF_DOCUMENT_TOKEN_TO_BE_REPLACED

What is the difference between Association and the State?

Certain Marxists have their own weasel words to cover their statist inclination. Unless pressed to demonstrate it, they routinely  refer to the Dictatorship of the Proletariat (as one person stated to me) as “a ruling class’ instrument of the suppression of class enemies”. The employment of coercion against the capitalists, they assert, means the association of the working class is a working class state.

This idea is not to be found in Marx or Engels writings and it isn’t even in the anarchist criticism leveled against Marx by Bakunin.

This really makes it appear as if the difference between working class association and a bourgeois state is who gets suppressed by violence. It poses the problem of association in  a way that isn’t even close to understanding how association differs from the state.

END_OF_DOCUMENT_TOKEN_TO_BE_REPLACED

In one of my earlier posts, I accused some Marxists of being fascists. Needless to say this did not go over well with those Marxists who might fall into the category of people who, although claiming to be communists, nevertheless believe any attempt to actually dismantle the present state amounts to a neoliberal assault on the so-called ‘social safety net’ allegedly provided by some fascist state spending.

One person on reddit who might fit the description of a statist communist responded to my argument this way:

1. That’s a lie; 2. Even if that were true, that analysis is bollocks.

Congratulations, you have posted something which does not actually raise any questions but instead goes on about Communists being fascists without any material analysis of what either is.

And aside from all that, all the article really does is state a fact, a fact that we are well aware of and spend our time actually analysising in a Marxist framework. The article does not analyse it in any framework, it just states it and rubbishes Communism at the same time. Absolutely useless.

Here’s a criticism: you are full of shit. Fuck you, fuck off.

Okay fine. I guess this writer and I aren’t going to find any common ground soon.