A reply to Reidkane on the class character of proletarians

In 1846, Karl Marx and Frederick Engels met together with a few other communists to lay out their common approach to the social revolution then developing in Europe. The results of their work,

as we all know, was an unpublished manuscript now known as the German Ideology. In it Marx and Engels elaborate on a method of social analysis we now refer to as historical materialism.

That document makes a number of claims about the proletarians which we today might consider heresies. Three in particular are the subject of the commenter, Reidkane:

END_OF_DOCUMENT_TOKEN_TO_BE_REPLACED

The Myth of Secular Stagnation, Part One 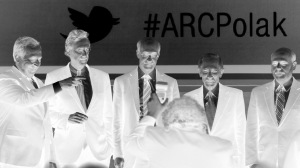 written from within neoclassical/Keynesian theory that attempt to make sense of the problem.

My perspective, however, will be unique in relation to the writers, because I will argue that stagnation is not a symptom of capitalist crisis per se, but a symptom of increasingly ineffective fascist state management of national capitals. In my perspective, capital has already suffered the breakdown of production on the basis of exchange value. This occurred in the Great Depression and was irreversible. However, after that breakdown, the fascist state stepped in and assumed management of the production of surplus value. The subject of the discussion of secular stagnation is the increasingly ineffective system of state management of capitalist production, not the operation of national capitals, per se.

END_OF_DOCUMENT_TOKEN_TO_BE_REPLACED

Part 2: How the Khoikhoi taught the labor theory of value to European merchant capital

Under the conditions Graeber posits — simple commodity exchange among potentially hostile neighboring groups that are themselves internally bound by moral relations —  the determinants of the fixed exchange ratio schedules anthropologists find are not likely to be subjective. And this is for the same reason that the exchange ratios between differing products of labor are fixed in the first place: to avoid conflicts that could spill over into war between communities. 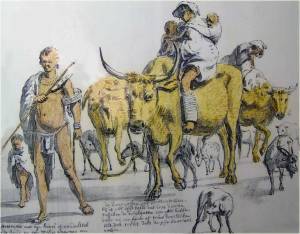 If, in the middle of a gathering for purposes of exchange between hostile groups of hardened combatants, individuals had to sort out their subjective arguments for why, say, eighteen, and not fourteen, arrow heads should exchange for one canoe, and if these subjective arguments differed among individuals on both sides of the dispute, what is the likely outcome of this process? How long could any given fixed exchange ratio be relied upon to remain fixed should a dispute break out?

END_OF_DOCUMENT_TOKEN_TO_BE_REPLACED

Part 1: Some thoughts on David Graeber, barter and the invention of money

I have been reading Engels “Origin of the Family, Private Property and the State” — and it is fascinating. To accompany it, I looked for recent works that more or less critique it, employing scientific information available after the book was written. 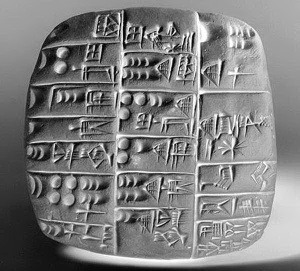 My first stop was this very good David Graeber response to the bourgeois economist, Robert F. Murphy, On the Invention of Money.. It is pretty good to have a communist who can call bullshit on everyone in the room on the basis of scientific expertise. Graeber, for instance, make this observation of the explanation for money offered by mainstream economics:

“Just in way of emphasis: economists thus predicted that all (100%) non-monetary economies would be barter economies. Empirical observation has revealed that the actual number of observable cases—out of thousands studied—is 0%”

Ha! I wish I had wrote that line.

END_OF_DOCUMENT_TOKEN_TO_BE_REPLACED

If I am reading his essay Navigating Neoliberalism: Political Aesthetics in an Age of Crisis correctly, it seems that Nick Srnicek thinks increased application of technology and art can help the Left to visualize global productive activity as a

If I understand his argument correctly, (and I want to emphasize this caveat, because he has told me he doesn’t recognize his argument in my first comments on twitter), he appears to believe that it may have been once possible for the Left “to make our own world intelligible to ourselves through a situational understanding of our own position”, but this is no longer the case:

“Jameson argues that at one time the nature of capitalism was such that one could potentially establish a correspondence between our local phenomenological experiences and the economic structure that determined it.”

However, with a globalized economy:

“We can no longer simply extrapolate from our local experience and develop a map of the global economic system. There is a deficiency of cognitive mapping, that is to say, there is an essential gap between our local phenomenology and the structural conditions which determine it.”

Why would this be a problem for the Left? Again, following this guy Jameson, Srnicek argues it becomes increasingly difficult to develop a socialist politics without the ability to conceptualize the social totality.

“With globalised capitalism having become unbound from any phenomenological coordinates, this possibility for a socialist politics has become increasingly difficult.”

Srnicek thinks it helps explain why, although neoliberalism is collapsing under the weight of its own contradictions, the Left has not been able to exploit this collapse to realize an alternative vision of society. There is an “abyssal void at the heart of alternative political thinking”, expressed in the “woefully inadequate” Occupy movement and a regressive longing to return to fascism’s Golden Age of the 1960s.

END_OF_DOCUMENT_TOKEN_TO_BE_REPLACED

1. Modern Money Theory, or the state as monetary sovereign 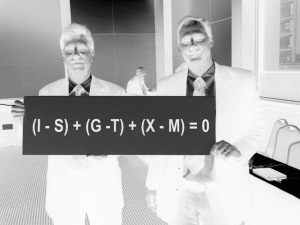 I want to state at the outset that by fascism I do not mean Nazism or any other peculiar manifestation of fascist politics from the 1930s. (Indeed, the ideas associated with modern money theory are popular across the entire spectrum of American politics — from the Tea Party to the progressive Left.) Rather, I will show that MMT expresses a fundamental tendency inherent in the capitalist mode of production toward the displacement of the capitalist class as managers of the production of surplus value by the state.

END_OF_DOCUMENT_TOKEN_TO_BE_REPLACED 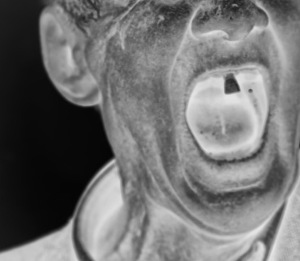 Ray Brassier’s take on Nick Land is jaw-droppingly silly for someone whose Wikipedia entry touts him as “one of the foremost philosophers of contemporary Speculative realism interested in providing a robust defense of philosophical realism in the wake of the challenges posed to it by post-Kantian critical idealism, phenomenology, post-modernism, deconstruction, or, more broadly speaking, “correlationism”.”

You would think with those sorts of credentials he could understand Land’s argument at least at the level of a recent entrant to university.

But you would be disappointed.

END_OF_DOCUMENT_TOKEN_TO_BE_REPLACED 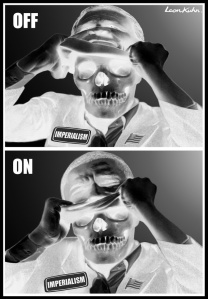 A number of writers have attempted to critique Thomas Piketty’s Capitalism in the Twenty-First Century. However, I have found it a better use of my time to read and critique the Marxist critiques of Piketty’s 600 pages of worthless bourgeois simpleton trash. One theme that has emerged on both sides of the divide between Marxist and bourgeois criticisms of Piketty is his vague, semi-Marxian criticism of capital and inequality. This is probably something we need to clear up here and now. Piketty has nothing in common with Marx’s critique of political-economy. While Piketty spends an ungodly amount of electrons showing how capitalism creates inequality, Marx demonstrated something much more important:

Lack of clarity on this point must lead to some pretty bizarre results.

END_OF_DOCUMENT_TOKEN_TO_BE_REPLACED

Anselm Jappe and the end of the wertkritik school?

I might turn out to be wrong, but based on my reading of Anselm Jappe’s “Towards a History of the Critique of Value”, I think wertkritik has encountered its limits. In the essay, Jappe shows that all you can get from wertkritik is an ever longer laundry list of dumb shit that will go when labor goes. This effort played a crucial role historically by challenging Marxism in all of its varieties, but it cannot do what we need right now — indicate a path forward.

Jappe states wertkritik has refused to come up with practical actions based on its methodology, but this is a specious argument: What he should have said is what the critics say themselves: wertkritik cannot provide a practical guide to action.

END_OF_DOCUMENT_TOKEN_TO_BE_REPLACED

Response to the critics of the term “fascist state”

I have received a large amount of criticism from Marxists regarding my insistence that the present state is fully fascist in every sense of the term. The most recent comes in the form of criticism that I am somehow being dishonest in my employment of the term fascist state and designation of Keynesian economic policies as essentially fascist:

People need to stop villainising Keynes. There’s an entire branch of economics that merges Keynes with Marx. The workers were hardly the most screwed by Keynesian policy: the petite bourgeoisie, with their vast savings, were far worse off (relative to what they had been before). Post-war Europe was one of the better times to be a worker in capitalism, far better than modern neoclassical neoliberalism.

The resistance of the Left to the term fascism is understandable for reason I will show. However, I insist my use of the term fully conforms with historical materialism, no matter how grating it may be for “progressives” and other Leftists. I base my assessment of the present state wholly on the argument made by Marx and Engels throughout their entire careers. In particular, I base it on the explicit argument made by Engels in Socialism, Utopian and Scientific. I offer my take in hope it will spark a discussion on the subject of the nature of the present state and the impossibility the state can in any way serve as a path to communism.