This shit is what passes for economics today… 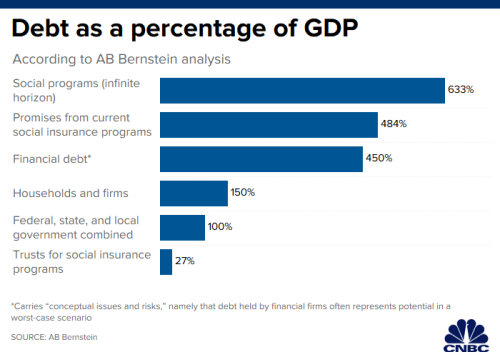 CNBC: Real US debt levels could be 2,000% of economy, a Wall Street report suggests.

I have used this chart before. It shows that, presently, many of the most important economies of the world market have interest rates that have plunged below the zero lower bound.

This event is so unprecedented in economic history that no one knows what to make of it. Prior to a decade ago or so, no one even thought it possible that lenders would advance credit at a loss. But here we are.

If Marxist theorists need any further confirmation that fiat currency doesn’t behave like money, they need look no further than Germany bonds, where the yield curve out to 30 years is now negative. Just try explaining, on the basis of Marx’s labor theory of value, creditors who lend their capital to the German state with the firm expectation they will incur a loss.

The only explanation that makes sense to me is that they are trying to avoid bigger losses of capital elsewhere. They accept a loss on the capital they lend to the Germany state to avoid losing more, or even all, of their capital elsewhere. In a commodity money regime, this situation could not happen. Alongside interest rates falling to zero, gold would be withdrawn from circulation into hoards. The two movements are driven by the same phenomenon — the falling rate of profit, which produces an ever growing mass of superfluous capital.